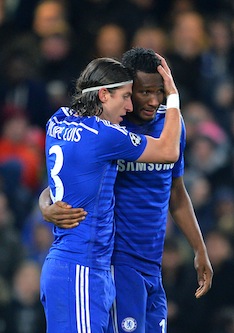 Mikel Obi scored his first Champions League goals as Chelsea sent Sporting Lisbon crashing out of the Champions League as the Blues got back on track with 3-1 win at Stamford Bridge on Wednesday.

Jose Mourinho’s side had suffered their first defeat of the season at Newcastle on Saturday and they wasted little time erasing the bitter taste of that Premier League loss with a dominant display in their Group G finale at Stamford Bridge.

The Blues were already certain of qualifying for the last 16 as group winners, but Sporting needed a point to be sure of progressing in second place and they weren’t up to the task.

Jonathan Silva reduced the deficit for Sporting in the second half, only for John Obi Mikel to net Chelsea’s third.

Sporting’s defeat, combined with Schalke’s win against Maribor, meant the Portuguese club were consigned to the Europa League as Chelsea did a big favour for their old boss Roberto di Matteo, who led the Blues to their first Champions League title in 2012 and is now in charge at Schalke.

With Chelsea already through, Mourinho was able to rest Eden Hazard, John Terry and Oscar among others, as he made six changes from the loss at Newcastle.

There was no opportunity for Diego Costa to indulge in some Christmas shopping, however, as Mourinho, concerned about the Chelsea striker’s spluttering displays following a series of injury problems, named his team’s leading scorer in what was still a strong starting line-up.

While Chelsea ostensibly had nothing to play for, losing to Newcastle had stung Mourinho and it was no surprise to see his players start as though they had a point to prove.

Filipe Luis was the catalyst for Chelsea’s eighth minute opener as the Brazilian left-back, finding himself in an advanced position, kept his composure to win a penalty with a clever nutmeg of Ricardo Esgaio that provoked a flustered trip from the embarrassed Sporting defender.

It was a clear foul and Fabregas stepped up to calmly stroke his spot-kick down the middle as Rui Patricio dived the wrong way.

Sporting’s hesitant, nerve-ridden start was at odds with the do-or-die nature of their task and Chelsea took full advantage to double their lead in the 16th minute.

Nemanja Matic clipped a pass into Schurrle and the Germany winger took one touch before turning and driving a fine, low strike past Patricio from the edge of the penalty area.

Islam Slimani headed narrowly wide as Sporting finally mustered an attack of note, but Chelsea were soon back on the front foot and Schurrle’s strike was pushed away by Patricio.

Sporting had 45 minutes to save their Champions League campaign and they made the perfect start to the second half when Silva struck in the 50th minute.

Andre Carrillo’s cross was headed away by Schurrle, but the ball fell to Silva on the edge of the area and he fired a clinical finish into the bottom corner.

But Mourinho’s men killed off Sporting for good in the 57th minute when Gary Cahill glanced a Fabregas free-kick to the far post where Nigerian midfielder Mikel tapped in for his first goal since January.

Midway through the half, news filtered through that Schalke had taken the lead against Maribor, meaning Sporting were heading for elimination.

They responded by throwing bodies forward and Slimani drew a good stop from Petr Cech with a powerful header.

But Chelsea were never seriously threatened and there was time for Ruben Loftus-Cheek, an 18-year-old midfielder, to make a lively seven-minute debut as a late substitute.