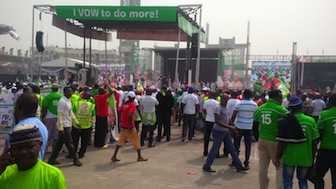 Lagos, southwest Nigeria was this morning locked down as President Goodluck Jonathan began his 2015 re-election campaign on the platform of the Peoples Democratic Party, at the Tafawa Balewa Square (TBS).

All major roads leading to Lagos Island and its environs experienced serious traffic congestion as early as 7:00 a.m.

Some routes were blocked in order to restrict vehicular movements on the Island as a result of the presidential campaign. There was gridlock from Oworonsoki all through the Third Mainland Bridge down to the venue.

Heavy security presence was witnessed at the venue with the Nigerian Army, police, Nigeria Security and Civil Defence Corps, DSS etc manning strategic locations in and around the TBS.

People going into the venue were made to form a queue and were thoroughly searched before they were allowed into the premises. PDP supporters from across the country filled TBS. Some displayed their cultural heritage to the admiration of the crowd.

Popular fuji act Abass Akande Obesere also known as Omo Rapala was on standby to thrill the crowd as at the time of filing this report.