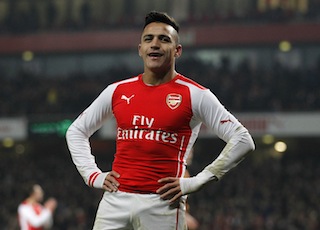 Alexis Sanchez delivered a majestic display as Arsenal closed the gap in the race for a top four finish in the Premier League with a 3-0 victory over Stoke on Sunday.

Sanchez made Laurent Koscielny’s opener and then netted his 17th and 18th goals of the season either side of half-time at the Emirates Stadium to lift Arsenal above Tottenham into fifth spot.

The battle for Champions League qualification is hotting up, with Arsene Wenger’s side now level on points with fourth placed Southampton, who face third placed Manchester United at Old Trafford later on Sunday.

“Collectively, you’re happy when you score a few goals. We had a strong start and we knew that was vital today,” Wenger said.

“Alexis Sanchez is one of the best players. He’s a fighter with a combination of talent and fighting spirit which is very difficult to find.

“He plays with passion and you want people to enjoy what they’re doing on the pitch and show it as well.”

Arsenal right-back Mathieu Debuchy was forced off with a shoulder injury after tangling with Stoke’s Marko Arnautovic.

“He has to see a specialist then we see where we go from there. A dislocated shoulder can take a while,” Wenger added.

But the hosts struck again in the 33rd minute.

It was another moment of magic from Sanchez as the former Barcelona forward took Tomas Rosicky’s pass and sized up his options before cleverly beating Asmir Begovic at his near post.

Sanchez wasn’t finished yet and his deflected free-kick four minutes after the interval sealed the points.