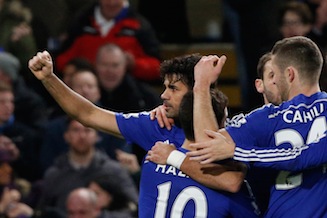 Oscar and Diego Costa both scored two goals each as Premier League leaders Chelsea overpowered Swansea 5-0 at the Liberty Stadium on Saturday to go five points clear at the top of the table.

The forwards completed their doubles before half-time as Jose Mourinho’s side extended their lead over Manchester City ahead of the champions’ match at home to Arsenal on Sunday, with substitute Andre Schurrle adding a fifth goal in the 79th minute.

It took visitors Chelsea less than a minute to open the scoring in south Wales.

Swansea midfielder Gylfi Sigurdsson’s poorly-weighted pass to Tom Carroll bounced off the Tottenham loanee and into the path of the Brazilian.

Three touches later and Oscar was celebrating a 20-yard strike that gave Lukasz Fabianski no chance.

The writing was on the wall for Swansea. After all, in the previous 15 games in which Oscar had scored for Chelsea, the Blues had never lost.

But Swansea, to their credit, came within inches of equalising, straight from the restart. Sigurdsson let fly from 25 yards, but the ball struck the outside of the upright and went out for a goal-kick. Stung by such a poor opening, Swansea were back on the front foot straight away with Wayne Routledge having a goal-bound shot blocked by Branislav Ivanovic.

At the other end, Willian fired over after Oscar’s shot had been parried by Fabianski. Oscar was just wide with another firm strike and Eden Hazard was denied by a smart save from Swansea’s Polish goalkeeper.

However, they got their second goal in the 20th minute. Fabregas, Willian and Oscar combined on the edge of the box to set up Costa for a simple finish.

Chelsea provided a lesson in passing to one of the division’s genuine footballing sides with Ivanovic, Fabregas and Oscar all combining to set up Willian, whose 29th minute strike thumped against the post before rebounding to safety.

A minute later, Routledge had to leave the fray with an ankle injury that he suffered inside the opening half a dozen minutes.

Swansea’s day went from bad to even worse 10 minutes before the interval when World Cup finalist Federico Fernandez inexplicably passed the ball back into the path of Costa, who finished with aplomb.

Garry Monk’s side had barely recovered from falling 3-0 behind when, a minute later, Chelsea had a fourth goal.

This time a wonderful counter-attack led to another chance for Oscar, who rifled his shot past Fabianski.

Willian, for a second time in the half, struck the woodwork after Costa rounded Fabianski and Swansea were glad to hear the half-time whistle.

Costa’s confrontation with Swansea captain Ashley Williams lit up the early moments of the second half.

Swansea were far more combative, although chances for the home side were few and far between. Chelsea, once again, created chances with Fabregas hitting his shot straight at Fabianski.

With Tuesday’s League Cup against Liverpool in mind, Chelsea eased off a little.

Still, they were rarely in trouble and two shots from distance from Nelson Oliveira were Swansea’s only genuine contributions in the final third of the pitch.

Chelsea manager Mourinho took off Costa, Willian and Fabregas in the final quarter, but it mattered little as Schurrle turned in an Ivanovic cross to make it 5-0.