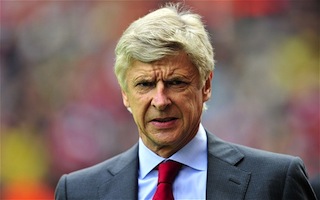 Arsene Wenger challenged Arsenal to show the consistency needed to win the Premier League after a 5-0 demolition of Aston Villa gave them renewed hope of a belated title challenge.

Wenger’s side were at their imperious best at the Emirates Stadium on Sunday as they swept to their biggest win of the season thanks to goals from Olivier Giroud, Mesut Ozil, Theo Walcott, Santi Cazorla and Hector Bellerin.

After a spluttering start to the season, the Gunners are now level on points with fourth placed Southampton and their primary target of qualifying for the Champions League is well within reach following three successive league victories.

But, with Walcott and Ozil returning to prominence after lengthy injury absences, Wenger harbours ambitions of a more lofty goal following Chelsea’s 1-1 draw against second placed Manchester City on Saturday.

Arsenal are 11 points behind leaders Chelsea and only six adrift of City, prompting Wenger to hint a run at the title isn’t impossible if his players can continue playing with the kind of verve and energy that overwhelmed Villa.

“For now let’s try to be consistent and see where we are. It’s too early to say what will happen because we are 11 points behind. That means they need to lose four games and we need to win four,” Wenger said.

“Our offensive game was good, we had some weaker periods in the game but we always looked dangerous when we got through their lines.

“Defensively we were sound and it was a positive day for us. That shows as well that maybe we have found a better consistency that will be important until the end.

“Lets show we can keep it going. It helps the confidence level when everybody is fit.”

The ruthless manner in which Arsenal dispatched Paul Lambert’s side could be a significant statement of intent coming just two weeks after an even more impressive victory at champions City.

It won’t do Arsenal’s chances any harm if Germany midfielder Ozil and England winger Walcott continue to progress towards peak form after their injuries.

“Mesut still lacks a little competitive edge but the quality of his game is exceptional. He is getting back now,” Wenger said.

“For Theo he needs more sharpness and physical contact, but he is a very intelligent player and the quality of his movement is good.”

Bolstered by a reduced injury list and with Brazilian defender Gabriel Paulista signed from Villarreal last week, Wenger is unlikely to be active on Monday’s transfer deadline day.

“I dont think I will be busy, we have done what we wanted, unless there is a huge surprise and somebody calls me. If that happens why not, but at the moment it doesn’t look very likely,” he said.

For Villa manager Lambert, this was another chastening day in a turbulent campaign.

Villa have gone six matches and 10 hours without scoring a league goal and their timid display will only add to the pressure on Lambert, whose team are three points above the relegation zone.

With 11 league goals to their name this season, Villa are the lowest scorers in England, but Lambert remains at a loss to explain their profligacy, which was on display as Andi Weimann and Christian Benteke wasted chances to equalise.

“I was pretty relaxed at 1-0. I thought we would get chances but the keeper made a good save from Andi’s header and then we had Christian’s chance. Those were big moments,” Lambert said.

“It was a strange game. I didn’t think we deserved to lose 5-0 but that’s the score so we have to take it. It’s not good enough.

“We do finishing and crossing in training every Friday, but when it comes onto the pitch you have to do it.

“You probably can’t print the things I’m feeling at the moment. We have been in this position for too long.”