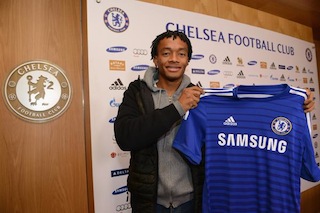 Chelsea made the biggest splash on a low-key transfer deadline day as the Premier League leaders signed Colombia international winger Juan Cuadrado from Fiorentina on Monday.

Blues boss Jose Mourinho had been linked with a move for Cuadrado for several weeks and he finally landed his target after making room in his squad by selling German World Cup winning winger Andre Schuerrle to Bundesliga title challengers Wolfsburg just hours earlier.

Cuadrado, 26 and who signed a four-and-a-half-year contract with the west London club, told Chelsea’s website: “I am very happy and thankful for this opportunity I’ve been given.

“This is a great club and honestly it is like a dream to join the Chelsea family and to know that the manager believes in me. I’m happy.”

Cuadrado, who had been at Fiorentina since 2012 after joining from Udinese, caught the eye with sparkling performances for Colombia at last year’s World Cup, where they reached the quarter-finals only to be beaten by hosts Brazil.

Cuadrado’s move was the most eye-catching deal on a day when most Premier League clubs seemed to be opting out of the usual last-ditch spending spree.

As part of the deal, Chelsea’s Egypt winger Mohamed Salah joined Fiorentina on loan until the end of the season.

Robinho, Fernando Torres, Mesut Ozil and Radamel Falcao are among the players to have completed spectacular deadline-day moves in recent years, but the current transfer period has bucked the trend.

The lack of activity was summed up by German centre-back Robert Huth’s loan switch from Leicester City to Stoke City standing as the biggest move for several hours.

Huth, 30, has fallen out of favour at Stoke after injury problems and he now follows goalkeeper Mark Schwarzer and striker Andrej Kramaric in joining bottom club Leicester during the January transfer window.

“I’m not expecting to walk into the team. I have to prove my worth,” Huth told Leicester’s website.

“I have watched enough Leicester games to be happy to come here, certainly the 5-3 win against Manchester United. And they beat Stoke at home, which was an upset for Stoke.”