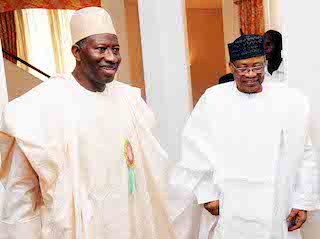 Former Nigeria head of state, Ibrahim Babangida has described President Goodluck Jonathan as dependable leader for the country, stating that, under Jonathan, Nigeria will continue the dreams of its founding fathers.

Babangida said this on Tuesday when he hosted Jonathan and his campaign entourage in Minna.

The former military leader said Jonathan was a leader who would continue with the dreams of the country’s founding fathers.

Babangida said he shared the same passion of peaceful, stable and developed Nigeria with Jonathan.

He added that “whenever I discussed with him, I see a young man who has passion for Nigeria. Under Jonathan, Nigeria is in safe hands.

“All the presidents that this country has produced have come to Minna for blessings and today that you have come, I will offer you blessings.”

Earlier, Jonathan had described Babangida as a dependable pillar in ensuring continued peace and stability of the country.

He said “as a deputy governor, you took me as a son and since I came on board as Vice President till date, you have been a pillar and a charismatic leader. You have been a stabilising factor in this country in many ways.

“You are not like some other past leaders. We pray for long life for you so that you can continue to mentor the country and to give rightful direction to us.”

The President later visited the palace of the Emir of Minna, Alhaji Umar Bahago, where he solicited the support and cooperation of the royal father.

He said he would continue with the development strides in the areas of transport, power, education and general infrastructure.

Bahago pledged the support of his emirate for Jonathan, adding that the electoral reforms put in place would ensure peace and progress of the country.