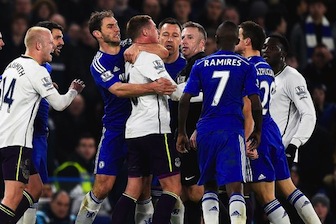 Chelsea and Everton have been charged by the Football Association with failing to control their players, but Branislav Ivanovic won’t face punishment over his clash with James McCarthy.

Blues defender Ivanovic tangled with Everton midfielder McCarthy during a mass brawl after Toffees star Gareth Barry was sent off in the 86th minute at Stamford Bridge on Wednesday.

A panel of former referees studied the incident, in which Ivanovic was accused of butting McCarthy on the back of his head, but decided it was not worthy of a red card.

The FA also investigated claims made on social media that Ivanovic had bitten McCarthy. The organisation studied all video footage and contacted Everton, and found conclusively he had not done so.

However both clubs face disciplinary action for “failing to ensure their players conducted themselves in an orderly fashion and/or refrained from provocative behaviour”.

The two clubs have until 1800 GMT on February 17 to respond to the charge.

Regarding Ivanovic, an FA statement read: “Chelsea’s Branislav Ivanovic will not face any further action in relation to an incident involving Everton’s James McCarthy in the 86th minute.

“In Premier League matches, if an incident has not been seen by the match officials, a three-man panel of former elite referees will be asked by the FA to review it and advise what, if any, action they believe the match referee should have taken had it been witnessed at the time.

“For an FA charge to follow, all three panel members must agree it is a sending-off offence. In this instance, the panel did not believe the conduct was worthy of a dismissal.”

Chelsea boss Jose Mourinho had threatened to walk out of his post-match media conference when asked about the possible headbutt by Ivanovic.

Mourinho, fined last month for saying there was a “clear campaign” against Chelsea, was not prepared to discuss the possibility the Serbia defender could face action.