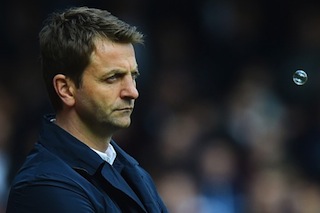 Former Tottenham Hotspur head coach Tim Sherwood has been appointed as the new manager of Aston Villa on a three-year contract, the Premier League club announced on Saturday.

Sherwood, 46, succeeds Paul Lambert, who was sacked on Wednesday after a run of 10 games without victory that saw Villa slide into the relegation zone.

“Aston Villa Football Club are delighted to announce the appointment of Tim Sherwood as our new manager,” Villa announced on their official website.

“Tim, 46, joins after a long and successful coaching career with Tottenham, culminating (in) a short but successful period as manager, and has agreed a contract that will see him take charge until the end of season 2017-18.

“The club are excited to have secured the services of one of English football’s most highly sought after managers.”

Sherwood has been out of work since he was sacked by Tottenham in May 2014, five months after taking up his first managerial role.

“It is a great honour to manage one of the biggest clubs in English football,” said Sherwood, who won the Premier League as captain of Blackburn Rovers in 1995.

“I can’t wait to get started and I’m really looking forward to the challenge.”

Sherwood is expected to take up his role after Villa’s FA Cup fifth-round game at home to Leicester City on Sunday, for which first-team coach Scott Marshall and goalkeeping coach Andy Marshall have been put in charge.

Villa recently went 11 hours without scoring a Premier League goal and fell into the bottom three for the first time this season following a 2-0 loss at fellow strugglers Hull City on Tuesday.

With only two wins from 21 league games, the 1982 European champions are now at risk of a first relegation since 1987.

But chief executive Tom Fox expressed confidence that in Sherwood, he and owner Randy Lerner had found the right man to turn the situation around and take the team forward.

“Tim had a fantastic career at Tottenham, not only in his brief spell as first-team manager but, just as importantly, in the role he played in developing young talent,” Fox said.

“We are determined to build a football operation with a long-term vision and a commitment to youth development.

“We strongly believe Tim has the qualities to get the best out of our current squad and help us build and develop for the future.”

In his brief spell at Spurs, Sherwood earned a reputation for promoting youth, with Harry Kane and Nabil Bentaleb among the young players drafted into the first team during his tenure.

Lerner said that Sherwood represented a “positive, fresh approach” and paid tribute to Fox and his colleagues for recruiting a successor to Lambert despite “severely limited time constraints and pounding pressure”.