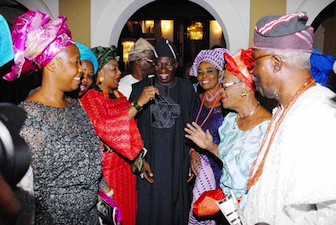 President Goodluck Jonathan on Friday promised to set up the first Co-operative University in the country to be cited in South West region of Nigeria.

He made the promise during an interactive session with the Odua Cooperative Alliance (OCA), a South West Co-operative movement, at the State House, Marina, Lagos.

The President, however, said he would set up a study group to examine how such a university functioned in Kenya to determine the various faculties and departments suitable for Nigeria.

He said the study group would also comprise members of OCA which made the request.

“The issue of university is that, you will nominate some people and we will send them to Kenya to go and really look at the setting up of the Cooperative University.

“They will look at the key departments and faculties they have.

“I really believe in the setting up of specialised universities. That was why I set up the Maritime University in Delta State.”

The President said he was glad that such university already existed in Africa and Nigeria would follow.

He added that the Federal Government would liaise with the Central Bank of Nigeria (CBN) to create access to the cooperative movement to soft loans for small and medium-scale enterprises.

According to him, his administration created the Youwin and other programmes to grant interest-free loans to young entrepreneurs and will incorporate cooperatives into the programmes.

Jonathan also said he would require inputs from OCA to enable the Federal Government to review the cooperative laws in the country to make them to adapt to current realities.

He said a lot of laws in the country needed to be amended and such laws that did not require public hearing could be addressed with dispatch.

President Jonathan acknowledged the passion of the OCA to lift the image of the country in the international arena.

“That is what I demand from everybody, to do their best to bring honour and glory to the country.

“If every Nigerian, individual or organisation does this then, Nigeria will continue to grow from strength to strength.”

Jonathan thanked the group for the massive support it gave his administration and urged it to intimate members of the achievements of the administration to enable them to re-elect him for a second term.

Earlier, the President of the OCA, Asiwaju Adetokumbo Osisanya, said the group was satisfied with the great transformation President Jonathan had brought to the country.

He said “these are very visible in the agriculture, transportation, especially railways, jobs creation, respect of rule of law and organising free and fair elections.’’

Osisanya said the OCA, by the visit, wished to show appreciation to the President “for your great efforts at improving the quality of life of the average Nigerian’’ such as eliminating fuel scarcity and convening the national conference.

“By the national conference, you stood out as the most courageous and well-intended President we are blessed to have.”

The group also requested the administration to provide intervention fund for effective take off of the National Cooperative Transport Scheme, as well as favourable policy framework for members to access national mortgage for housing.

The group assured the president of massive support with their votes during the 2015 polls.