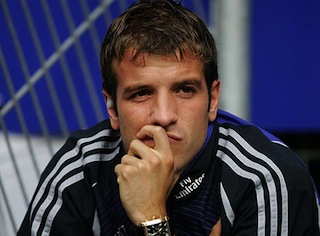 Rafael van der Vaart still has a future at Bundesliga strugglers Hamburg, according to the club’s chairman, despite a string of poor performances which have seen the Netherlands midfielder dropped.

The 32-year-old sat out Hamburg’s 1-1 draw at home to Borussia Moenchengladbach on Sunday, having been hauled off midway through the second-half of his side’s 8-0 rout at Bayern Munich ten days ago.

“He is still a big player and sat out the last game, but the season is still long and we need him,” Hamburg chairman Dietmar Beiersdorfer told SID, an AFP subsidiary.

In 15 appearances this season, the Dutchman, who has made more than 100 international appearances for Holland, has been replaced 12 times.

Hamburg signed van der Vaart from Premier League side Tottenham Hotspurs for 13 million euros ($14.7 million) in 2012 and he has admitted he is “not in form”, with Hamburg just two points from the relegation places.

Coach Joe Zinnbauer said it was unclear whether Van der Vaart would play in the next game on Saturday at Eintracht Frankfurt.

“Anyone who knows Rafa, knows this sort of thing doesn’t just pass him by, but he is a professional and has shown a reaction,” said Zinnbauer.