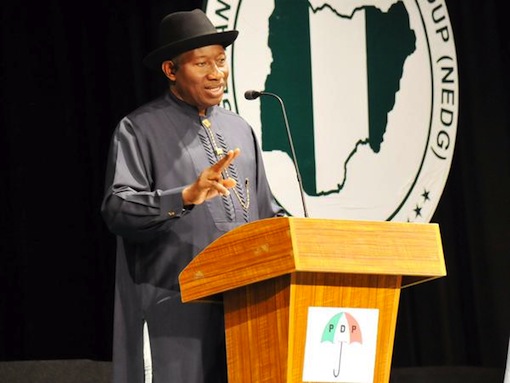 President Jonathan at the NEDG 2015 Presidential Debate on March 22

President Goodluck Jonathan has urged Nigerians to stop celebrating people with ill-gotten wealth in order to discourage corruption in the country.

Jonathan, who participated in the Presidential Debate organised by the Nigeria Elections Debate Group (NEDG) on Sunday in Abuja, said Nigerians should change their attitude towards primitive accumulation of wealth.

He said that his government has introduced e-payment system in the country to stop the flow of raw cash and diversion of funds to reduce embezzlement.

Jonathan said the method he used in fighting corruption was prevention, strengthening of institutions and re-orientation of the people.

“Nigerians should change their mentality and condemn people with ill-gotten wealth.

“What we see is a situation where somebody gets wealth illegally and goes to his village and they give him a chieftaincy title.

“In the government circle, we used the IPPIS; no more use of raw cash; it cuts across all sectors and in that case you stop people from stealing public fund.”

According to Jonathan, the government has tackled irregularities that characterised the supply of fertiliser to Nigerian farmers.

On corruption, the presidential candidate of National Conscience Party, Mr Martins Onovo, said that no meaningful development would be achieved if corruption was not tackled.

Contributing, Chekwas Okorie, the presidential candidate of the United Progressives Party (UPP) said that the fight against corruption must start from the top and that leaders must lead by personal example.

“Assets declaration will be compulsory and made public and should be reviewed yearly.

“Immunity must be limited to civil matters and all criminals must be tried.”

Prof. Oluremi Sonaiya, the presidential candidate of KOWA Party, said that public office should be made less attractive by making the holders to earn normal salaries.