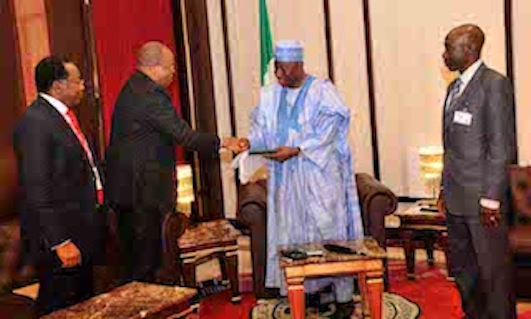 President Jonathan receiving the report on the NNPC audited accounts by PriceWaterhouseCoopers, from country director Uyi Akpata on 2 February

President Goodluck Jonathan has denied allegations by the All Progressives Congress that his administration is engaging in last minute looting ahead of the May 29, 2015 handover date to Nigeria president-elect, Major General Muhammadu Buhari (retd).

And in what seem a response to assertions by the president-elect yesterday that he will conduct a probe into the $20 billion the Nigeria National Petroleum Corporation, NNPC failed to remit into the national treasury as alleged by Lamido Sanusi Lamido, former Governor of Central Bank of Nigeria, CBN, the President has also ordered a release of the report of the PriceWaterHouse investigations of the allegations.

In a statement issued on his behalf by Dr. Reuben Abati, his spokesperson, the President said the allegation of looting by APC was nothing but lies as his administration is preoccupied with ensuring a smooth handover of the reins of power to the new government.

The APC has also said it will release the report of the probe on assumption of office.

The statement by Abati reads: “We have noted with concern, the allegation by the spokesman of the All Progressives Congress (APC), Alhaji Lai Mohammed that officials of the Federal Government are engaged in “last minute looting of the nation’s resources, rushed privatization of key institutions and hurried recruitment into the public service”.

“We also consider as most unfortunate and uncharitable, the suggestion by Alhaji Mohammed that the Jonathan Administration is trying to “tie the hands” of the incoming government merely by continuing to discharge its constitutional responsibilities until the end of its tenure.

“The Jonathan Administration which continues to do its best to ensure a smooth and peaceful handover over of power to the President-Elect, General Muhammadu Buhari, deeply regrets the unfairness and combative frame of mind reflected in Alhaji Mohammed’s statement.

“President Jonathan has done his best in the past five years to discharge his constitutional responsibilities for good governance and effective leadership of the nation.

“Without any prejudice whatsoever to the freedom of the incoming administration to do as it pleases, within the confines of extant laws when it assumes
office, the Jonathan Administration will continue to discharge its responsibility to govern until May 29, 2015. In continuing to fulfil the obligations of his office however, President Jonathan has not, and will never condone any form of unscrupulous conduct on the part of state officials.

“President Jonathan will also never authorise any attempt to create any problems for the incoming administration as the APC spokesperson, who ought to know that the outcome of the March 28 presidential elections does not imply a cessation of governance, unjustly alleges.

“As Alhaji Mohammed threatened in his statement, the incoming administration will be perfectly within its rights to review all actions of the present government as it may deem fit.

“We see nothing wrong with that. After all, the present Administration reviewed the actions of previous governments on assumption of office with resultant benefits for policy and project implementation.

“President Jonathan is also deeply concerned by the continuing suggestions that his administration still has anything to hide about the unproven allegation that about $20 Billion is unaccounted for by the NNPC during his tenure.

“To lay the matter to rest, President Jonathan in line with Section 7(2) of the NNPC Act, has directed that the full report of the PWC Forensic Audit of the NNPC accounts be released immediately to the public so that all Nigerians will be properly informed on the matter.”
The Presidency also provided a link to the report.