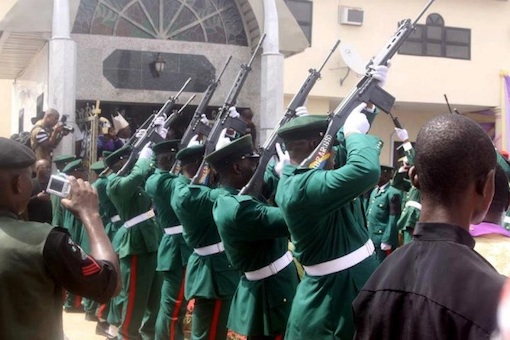 The Guards Brigade of the Nigerian Army on Monday in Abuja alerted the public on firing of artillery guns for Presidential Inauguration and Swearing in Ceremony come May 29.

This was contained in a statement issued by Maj. Charles Ekeocha, the Assistant Director, Army Public Relations in the Guards Brigade.

The statement quoted Ekeocha as saying “rehearsal for the Presidential Inauguration and Swearing in Ceremony has commenced since May 4 at the Eagle Square, Abuja.

He said the rehearsal involved firing of the traditional 21 gun salute.

He stated that “the practice session for the 21 gun salute will take place on May 20 and May 25, and on the inauguration day, May 29.

“The public is hereby notified, especially those living within Asokoro area of Abuja and its environ not to panic at the sound of simulated firing of military weapons during the dates.”