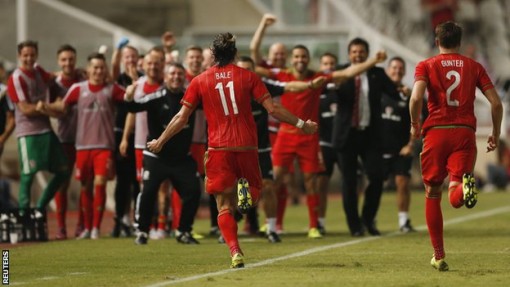 Gareth Bale says Wales will be stepping into the unknown on Sunday when they attempt to beat Israel in Cardiff and seal their place at Euro 2016.

The Real Madrid forward headed the vital goal in Cyprus as Wales won 1-0 in Nicosia and stay top of Group B.

With the top two qualifying for France, three more points will be enough to seal Wales’ place at a major finals for the first time since 1958.

“But this group is focused, we really know what we need to do and hopefully we can deliver on Sunday.

“It would probably be the best thing we’ve achieved. If we can get across the line it’ll be an amazing thing, not just for us but the whole nation and the whole of Welsh football.

“We know what’s coming. All out attention has been focused on the Cyprus game, we haven’t thought about the Israel game at all.

“That’s the good thing about this team, we haven’t taken our eyes off the ball once.”

Wales had not won in Cyprus since 1992 and as chances came and went in Nicosia on Thursday it seemed as though they would be denied once again.

But with eight minutes remaining on the clock, Jazz Richards picked out Bale and the 26-year-old met the ball with a thumping header that gave the excellent Antonis Georgallides in the Cyprus goal no chance.

“I’ve not scored too many better [headers] and at a vital time, which was important,” added Bale.

“Obviously it wasn’t our best performance in terms of attacking but we defended well as a unit and showed again what a good team we are.

“We try to defend as a team from front to back, but the backline were incredible. In the end we deserved to win, we created the better chances.”

Wales boss Chris Coleman said that Joe Ledley remained a “huge doubt” for Sunday’s match against Israel with the hamstring problem that saw the Crystal Palace midfielder miss out in Cyprus.

But West Bromwich Albion defender James Chester has a chance of playing after his hamstring injury kept him out in Nicosia.

West Ham United’s James Collins is another option at the heart of defence.

But after the performance of skipper Ashley Williams, Chris Gunter and Ben Davies in Nicosia, Wales manager Chris Coleman may be unwilling to tinker with his winning formula.