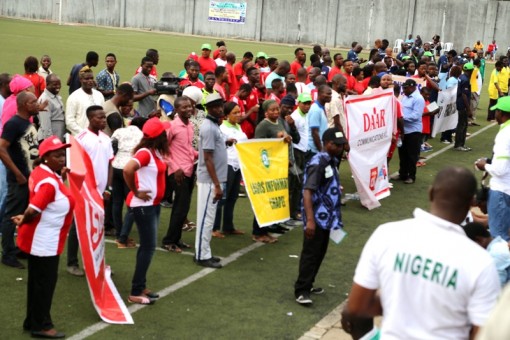 Lagos State Sports Commission, LSSC, has said that the next edition of Lagos NUJ Media Games in 2016 will be staged inside the Teslim Balogun Stadium, Surulere, Lagos, southwest Nigeria.

Before now, the annual event, which 10th edition ended last weekend, was staged inside the National Stadium complex in Surulere.

Speaking at the closing ceremony of the tournament sponsored by Med-View airlines, the Director General of the Sports Commission, Mr. Ayodele Agbesanwa said that the success and the glamour associated with the Games has prompted the state government to come to the aid of the organisers by providing Teslim Balogun Stadium as venue for the 2016 edition.

He said that the Commission will, at all times, give Nigerian Union of Journalists (NUJ), Lagos chapter the support needed to engage its members in sporting activities.

Daar Communications won the bronze medal of the football event after they defeated SportsDay in the third place match.

Chairman of the Lagos NUJ, Mr. Deji Elumoye said that a total of 21 media houses took part in the competition and they were given participatory allowance from the N5 million sponsorship fund of Med-View airlines.

He commended the spirit of sportsmanship exhibited by all the teams, adding that the next edition which will take place at the Teslim Balogun Stadium will be more glamorous.