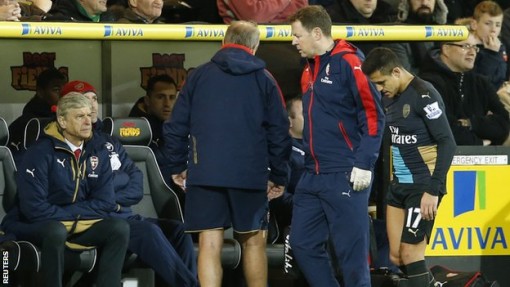 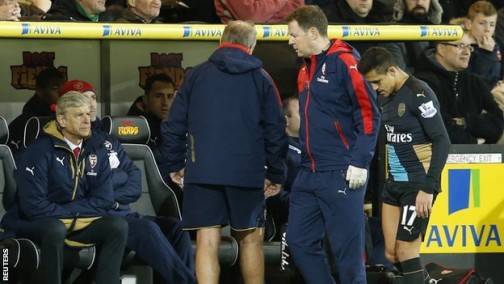 Arsene Wenger defended his decision to start Alexis Sanchez in Sunday’s 1-1 draw with Norwich after the Chilean and two other players picked up injuries.

But he started on Sunday and Arsenal’s injury problems worsened in what Wenger said was a “below par performance”.

“I would have rested him but he said he was fine to play,” the Frenchman added.

“Santi Cazorla finished on one leg and has a knee problem, Laurent Koscielny has a hip problem and Sanchez a thigh problem.

“He says it is a kick on his hamstring, I believe that is not really the reality. I fear it is not the reality.

“I do not know how long Sanchez will be out but it is a big blow. We will have to assess the injuries tomorrow.”

Koscielny had to be taken off early in the first half at Carrow Road, with Sanchez withdrawn in the second half.

Had Cazorla also been forced off Arsenal would have finished with 10 men, having made all three substitutions after Norwich striker Lewis Grabban cancelled out Mesut Ozil’s opener just before half-time.

The result meant Wenger’s side missed out on the chance to draw level on points with Manchester City at the top of the Premier League table.

‘Wenger must be worried’

“These are not just injures but injuries to key men. Wenger must be worried,” he said.

“Alexis Sanchez has been in scintillating form and you could see Arsenal missed him when he went off.

“It will be a massive loss, as will be Laurent Koscielny. Arsenal looked shaky when Gabriel came on.
They will really miss both players in the coming weeks.

“I don’t believe Wenger would have risked Sanchez. Why would he? He must have declared himself fit, but he hobbled off and it did not look good.”

Just how many injuries do Arsenal have?

Should the injuries to Cazorla, Sanchez and Koscielny prove to be serious, there would be a total of nine Arsenal first-team players sidelined.

Defensive midfielder Francis Coquelin is expected to be out for three months after suffering ligament damage, while Jack Wilshere, Tomas Rosicky and Mikel Arteta are also out.

“At the moment on the striker front we have not much choice because Theo Walcott is out and Danny Welbeck is out,” Wenger added.

“It was, on the injury front, a bad afternoon for us.”