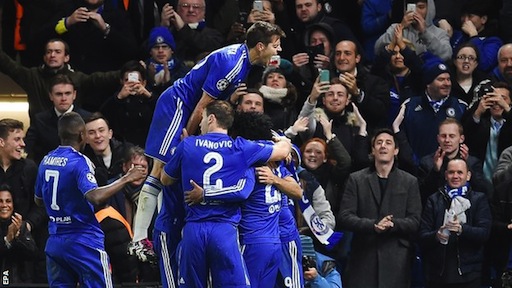 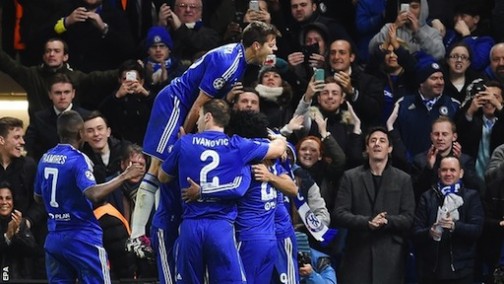 Chelsea forgot their domestic woes by easing into the Champions League knockout stage with a routine victory which eliminated opponents Porto.

The Blues enjoyed some luck for the opener as Diego Costa’s low shot was saved by Porto keeper Iker Casillas and rebounded in off Ivan Marcano.

Porto, needing to win to join Chelsea in the last 16, offered little threat.

Willian ensured Chelsea advanced as Group G winners by thumping in a rising shot from 20 yards after the break.

The Blues created plenty of opportunities in the final 15 minutes, exploiting the space left behind as Porto chased an improbable comeback at Stamford Bridge.

The comfort with which Chelsea negotiated a potentially nervy evening came as welcome relief for manager Jose Mourinho, after a season which has lurched from one calamity to another.

The reigning Premier League champions have struggled domestically, losing eight of their 15 top-flight matches this season to leave them in 14th position.

Mourinho’s position has been under intense scrutiny amid their perilous league position, but he insisted before the match that he retained the unwavering support of Blues owner Roman Abramovich.

And his players responded to Saturday’s shock home defeat by newly-promoted Bournemouth with a solid, if not sparkling, victory.

Winning their group means the Blues will avoid the likes of Barcelona, Real Madrid and Bayern Munich when the last-16 draw is made on Monday.

The London side will be drawn against either Paris St-Germain, Juventus, PSV Eindhoven, Benfica, Roma or Gent.

The Spain striker enjoyed a productive debut campaign as the Blues easily won the Premier League title last season, but was left on the bench against Tottenham and Bournemouth after struggling to replicate that impact this term.

Costa responded with an industrious display against Porto, creating space for his team-mates with his movement and drawing the save from Casillas which led to Chelsea’s opener.

He also linked up neatly with Hazard for Chelsea’s second, holding up the ball to bring in the Belgian, who played in Willian for his seventh goal of the season.

The only blemish in Costa’s performance was his inability to score himself and he was bundled over by Porto defender Danilo when clean through in the final 15 minutes.

Nevertheless, he received a standing ovation when he was replaced in the final few minutes – and a warm embrace from Mourinho.