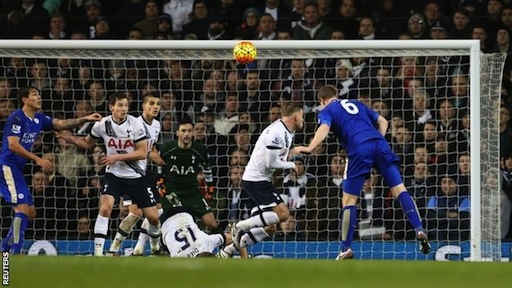 The Foxes, who are now level on points with leaders Arsenal, looked like they were heading for a fourth league game without a goal until unmarked Huth headed home Christian Fuchs’ corner.

Harry Kane had Spurs’ best chance when his effort was touched on to the bar by keeper Kasper Schmeichel.

Foxes striker Jamie Vardy returned from groin surgery but had a quiet game.

It was the second of three meetings between the clubs in 10 days, following Sunday’s 2-2 FA Cup draw – with their replay to be shown on BBC One, next Wednesday.

There had been fears Leicester’s slide was beginning after three games without scoring – and they looked like making that four in a row before Huth’s late goal.

But this win – which takes them seven points above fourth-placed Spurs and eight clear of West Ham in fifth – will give them real hope of finishing in the Champions League places, if not higher.

They were characteristically short of possession with only 39% – their average of 40.62% is the third lowest in the league – but they have shown they are far from a two-man team with Riyad Mahrez and Vardy, their two stars of the campaign, subdued throughout.

-Do Spurs need a new striker?-

Maybe, but it was wasteful finishing rather than the lack of a second striker that cost Spurs against the Foxes.

Manager Mauricio Pochettino has continually insisted it is not urgent they sign a new striker to partner Kane, who is their top scorer with 11 league goals.

The England international was their sole striker against Leicester but Spurs’ formation meant Erik Lamela, Christian Eriksen and Dele Alli got forward to support him regularly.

Those four had a combined 18 shots, although Kane’s effort which Schmeichel touched on to the bar was one of only five shots on target the team managed.