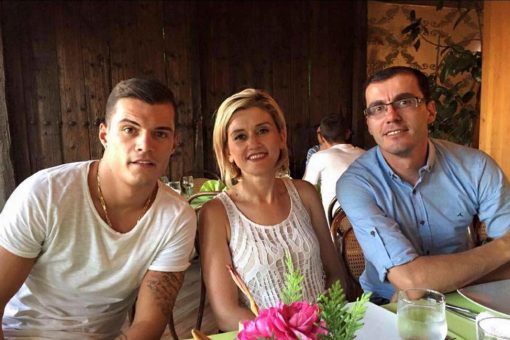 Granit Xhaka's (L) move to Arsenal is set to be finalised, according to close friend and journalist Artan Muhaxhiri (R)

Granit Xhaka is heading to London in order to finalise his Arsenal move, according to close friend and journalist Artan Muhaxhiri.

The Borussia Monchengladbach midfielder has been heavily linked with an Emirates switch following another top season in Germany, and it now appears that a deal is all but done.

Albanian TV reporter Muhaxhiri is close to Xhaka, whose parents are Kosovo Albanians, and he has claimed on his official public Facebook page that the transfer is close to completion.

Posting a picture of himself alongside Xhaka, Muhaxhiri wrote: “Just confirmed. Granit Xhaka is traveling to London to finalise an agreement with Arsenal FC! Congrats Granit!”

The news will come as a huge sigh of relief to Gunners fans following earlier reports that the deal was in jeopardy.

German newspaper Bild claims Arsenal had bid just £19million for Xhaka, who is valued at £34m by his club, despite the Switzerland international revealing he was confident of agreeing a move before the start of Euro 2016.