Confusion as visiting team arrives after walk over 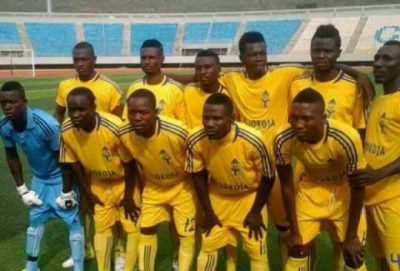 Confusion reigned at the Area 3 football pitch in Abuja on Friday when visiting FC Lokoja arrived few minutes after a walk-over was declared on them.

FC Lokoja had arrived the venue of the match against hosts FC Hearts five minutes before 3 p.m. for a 2015/2016 Nationwide League One (NLO) Division Two Group D1 match.

The match was scheduled for 2 p.m.

Abasafyan Hayatu, the game’s Match Commissioner from Niger, had been forced to declare the game a “walk-over’’ for the host side after 50 minutes of waiting by the match officials.

This means the match was awarded to the home team, with three points and three goals to their credit.

“For almost two hours the team has not been here. They were expected for the pre-match meeting earlier in the day around 10 a.m., but they did not arrive.

“Enough time has been given to them to arrive but they are not here. We gave them over 45 minutes after the match kick-off time of 2 p.m. and that is what the rules say.

“So, now we have done the walk-over ceremony, and it is three points and three goals to FC Hearts.

“That is the report we are going to submit to the league’s organizers, the NLO, and whatever their decision is will be made known to all.

After this, FC Hearts dispersed and the match officials started to leave the match venue.

Just then, the visiting side came into the venue, with the Match Commissioner later telling NAN the match could now be played at another venue, the FIFA Goal Project pitch.

“This team just came now and they said that their vehicle developed a fault on the way and they had to board another vehicle to bring them to this place.

“Now, both teams have agreed that they should shift the match to another venue.

“This is because the visiting team has a genuine reason and it can happen to any team,’’ he added.

But home team coach Shehu Gaya, who was earlier excited with the points awarded his team, was furious with the latest decision that the match should now be played.

“The rules say that you should be at the match venue a day to the match, and the reason they (the visiting side) are giving to us have not been put into writing.

“They said they called the authorities that their vehicle broke down, but they (the authorities) did not communicate this to us until after the walk-over has been done.

“The walk-over was done 50 minutes into the match time, not even the mandatory 30 minutes. Now, it was when we were going that they started calling us back for the match.

“Is that how the league will be run, with nothing written on paper to show what they are claiming? We will not honour any match,’’ he said.

Baba Ali, coach of FC Lokoja who had earlier refused to speak with NAN, later gave reasons for their late arrival.

“On our way our vehicle broke down. The first thing we needed to do was to inform those we need to inform, and we did that.

“We arrived in Abuja at exactly 2.30 p.m. and the match officials said we could not play the match.

“Later they decide that we should go to the Goal Project and play and we are on our way there,’’ he said.

At the Goal Project pitch, both teams as well as the referees were not around when NAN arrived the venue.

Olushola Ogunnowo, Secretary of NLO, later told NAN the Match Commissioner had no right to declare a walk-over.

“The team earlier said that their vehicle broke down and it is a reason that is quite acceptable.

Efforts made by NAN to get the reactions of both coaches after this declaration by the NLO official proved abortive.