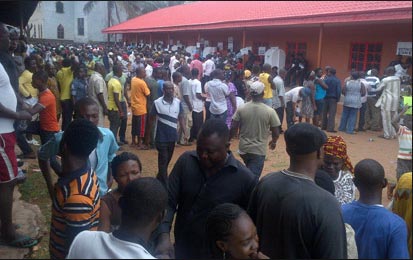 A gender-based NGO, African Women Empowerment Guild(AWEG), has called on INEC to provide separate queues for men and women at polling units in future elections in Edo.

The group made the call on Thursday in Benin while addressing a news conference after monitoring Wednesday’s governorship election.

The press conference was addressed under the aegis of Stop violence against women in Election( Stop-VAWIE) and was organised by the International Federation of Female Lawyers(FIDA), Edo chapter and AWEG.

FIDA’s President in Edo, Mrs Marie Edeko, who read the text of the press conference, said the decision by INEC to combine accreditation and voting was commendable as “it reduced time wasting, especially for women’.’

Edeko then commended the number of women engaged by INEC as its ad hoc staff for the election.

She called on political parties to include more women as party agents in future elections.