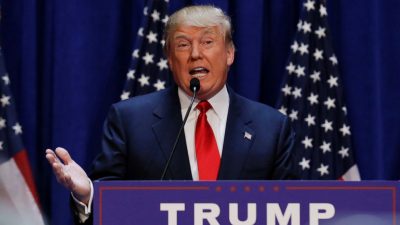 U.S. President-elect, Donald Trump, has called for unity among Americans and urged the citizens to unite and move forward as one country after a bruising political campaign.

Trump said in a video address to mark Thursday’s Thanksgiving Day that the tension of the campaign could not heal overnight.

In the address, which was posted on social media, The president-elect called for the restoration of trust among citizens.

“We are very blessed to call this nation our home and that’s what America is, it is our home.

“It’s where we raise our families, care for our loved ones, look out for our neighbours and live out our dreams.

“It’s my prayer that on this Thanksgiving, we begin to heal our divisions and move forward as one country, strengthened by shared purpose and very common resolve.

“In declaring this National Holiday, President Lincoln called upon Americans to speak with one voice and one heart, that’s just what we have to do.

The president-elect, who said that political campaign was over, added that it was now time to begin a campaign to rebuild the country.

“We have before us the chance now to make history together, to bring real change to Washington, real safety to our cities and real prosperity to our communities, including our inner cities.

“This historic political campaign is now over but now begins a great national campaign to rebuild our country and to restore the full promise of America for all our people.

“I’m asking you to join me in this effort; it’s time to restore the bond of trust between citizens because when America is unified, there is nothing beyond our reach.

“Let us give thanks for all that we have and let us boldly face the exciting new frontiers that lie ahead,” Trump said in the address.

Thanksgiving Day is a public holiday celebrated on the fourth Thursday in November in the U.S., originating as a harvest festival.

Thanksgiving has been celebrated nationally on and off since 1789, after a proclamation by George Washington.

However, it has been celebrated as a federal holiday every year since 1863, when, during the American Civil War, President Abraham Lincoln proclaimed a national day.

Lincoln proclaimed it a day of “Thanksgiving and Praise to our beneficent Father who dwelleth in the Heavens”, to be celebrated on the last Thursday in November.

Together with Christmas and the New Year, Thanksgiving is a part of the broader holiday season in the U.S.