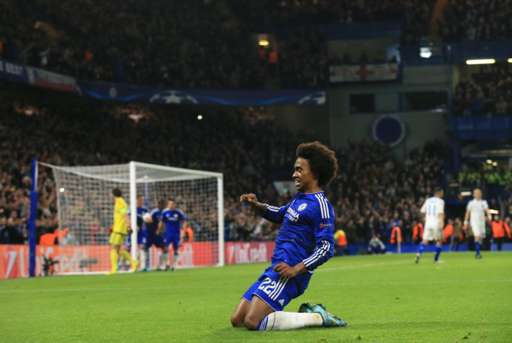 Willian celebrates after scoring for Chelsea

Premier League leaders Chelsea equalled the top flight record of 13 consecutive wins in a single season after overcoming valiant Stoke in a thriller at Stamford Bridge.

An exceptionally entertaining second half witnessed five goals as the Blues were twice made to retake the lead by a Potters side who gave them one of their toughest tests this season.

Gary Cahill gave Chelsea the lead when he headed in shortly before half-time, but Stoke defender Bruno Martins Indi levelled only a minute after the break when he poked in from close range.

Willian handed the Blues the advantage again only for Peter Crouch to level with a sidefoot effort high past Thibaut Courtois.

Stoke barely had time to celebrate, as moments after the restart Chelsea drove towards goal with Willian applying an fierce angled finish.

With five minutes remaining, the Blues all but sealed the three points when Diego Costa – who was magnificent as a target-man – shrugged off the attentions of Martins Indi to fire in the fourth.