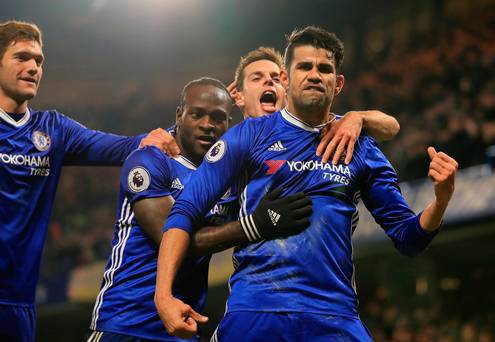 Diego Costa on Sunday scored for leaders Chelsea as the Blues defeated bottom-of-the-table Hull City 2-0 in Week 22 of the English Premier League (EPL) at Stamford Bridge.

Costa scored when he converted Victor Moses’ low cross from eight yards out in the seventh minute of first-half injury time.

The long stoppage time was a result of a head injury to Hull midfielder Ryan Mason, who went to hospital after being carried off on a stretcher wearing an oxygen mask.

This had followed a clash of heads with Chelsea defender Gary Cahill.

The Spain striker missed last weekend’s 3-0 win over champions Leicester, citing a back injury after a disagreement with a fitness coach, amid reports of Chinese Super League interest.

But the Blues’ top scorer —- cheered throughout the game by home fans —- returned against struggling Hull and had an early impact.

He sent an effort from 20 yards fizzing just wide after only 10 seconds.

Hull played well but lacked the cutting edge without the injured Robert Snodgrass, and Cahill sealed the win when he headed home Cesc Fabregas’ free-kick in the 80th minute.

The Blues are now eight points above second-placed Arsenal, the only other team in the top six to win this weekend.

But a 15th win in their past 16 league games takes Chelsea one game closer to a sixth English top-flight title.

It was also their 13th Premier League clean sheet of the season.