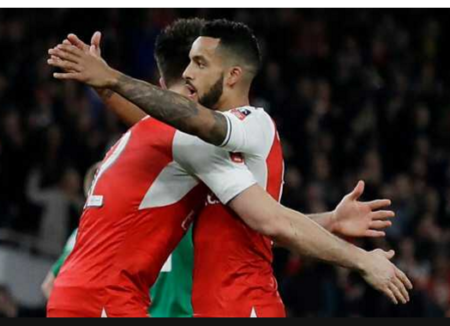 Non-league Lincoln City’s astonishing run in the FA Cup came to an end as Arsenal remain on course for a 13th title by reaching the semi-finals.

Lincoln, 88 places below their Premier League opponents, held their own for much of the first half and even went close to scoring when Petr Cech saved Nathan Arnold’s curled effort.

However, Theo Walcott’s deflected strike gave the Gunners the lead on the stroke of half-time and Olivier Giroud put the hosts in control with a clinical strike just after the break.

BBC reports that Lincoln’s dreams of a fight back were dashed when Luke Waterfall scored an own goal, turning in Kieran Gibbs’ cross.

Alexis Sanchez added a brilliant fourth, expertly placing the ball beyond Lincoln goalkeeper Paul Farman’s reach, before Aaron Ramsey completed the win when he tapped in from Sanchez’s cross.

It was ultimately a routine victory for Arsenal and perhaps eased some of the pressure on Arsene Wenger, who is bidding for his seventh FA Cup triumph as Gunners boss.

A protest was held before the game by around 200 fans urging the club to not give the 67-year-old a new contract when his current deal expires this summer.