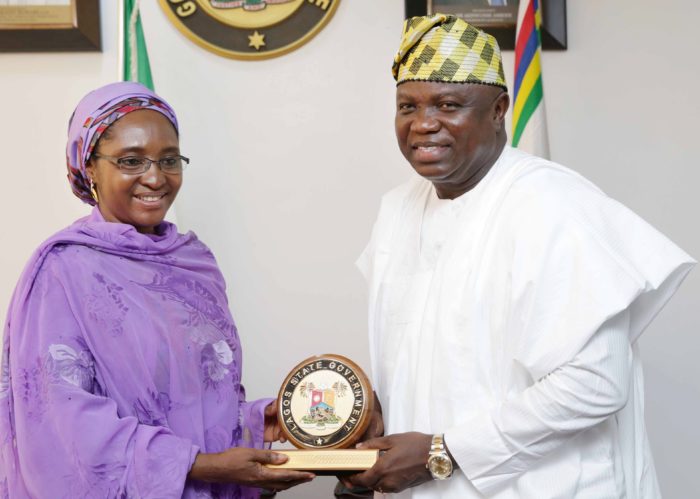 Lagos State Governor, Mr. Akinwunmi Ambode (right), presenting a State plaque to the Minister of State for Budget & National Planning/Chairperson of NEC Implementation Monitoring Committee, Hajia Zainab Maina during the courtesy visit by the Minister of State and NEC Implementation Monitoring Committee to the Governor at the Lagos House, Ikeja, on Monday.

Lagos State Governor, Mr. Akinwunmi Ambode on Monday identified the need for States to learn from each other and explore their various areas of strength and strategic partnership to engender economic development.

The governor, who spoke at Lagos House in Ikeja when he received members of the National Economic Council (NEC) Implementation Monitoring Committee on Retreat on the Economy led by the Minister of State for Budget and National Planning, Hajiya Zainab Ahmed, also urged the Federal Government to create a framework that would allow States to benefit from each other with the view to fostering concentric cycle of growth in the country.

Ambode commended the Committee for choosing Lagos as the first State to visit, saying that it was a confirmation of the success of the partnership between Lagos and Kebbi State on commodities production.

He said: “The essence of this is that beyond the things that we say in NEC in terms of project, we should be able to find a common platform and a framework that allows every other State to benefit from the comparative advantage that each State is bringing to the table and the choice of Lagos as the first State to visit by the Committee in terms of the project signified how serious we have been able to carry out most of the things we have been doing and what underscores that is what we have been able to achieve in our little time on the partnership with Kebbi State on commodities production in the country.

“We believe strongly that the way to go forward is for us to bring out our comparative advantages in our various States and be able to learn from each other. So, I want to recommend to this Committee that beyond the fact that you are doing visitation, let it end up to be part of the framework to work around peer-review mechanism amongst States and then for us to take advantage of what we are doing.”

The governor added that beyond partnership with Kebbi State, his administration has also significantly improved on the Gross Domestic Product (GDP) of Lagos in terms of improving on the productivity of citizens and making life more comfortable for them.

“We have improved so much on security to create that platform to allow people to do their business more comfortably and in doing that, the end result is that when more people are doing their trade and distributing goods and services, it is likely to touch on our IGR and that means more people will pay taxes which at the end of the day we would use to provide more infrastructures.

“So, I want to recommend this template to this Committee that you should observe it and document it also and use it to encourage other States to create that concentric cycle of growth and development in the country,” Ambode said.

The governor also commended the Vice President, Professor Yemi Osinbajo who also doubled as NEC Chairman for taking strong steps to actualize deliberations and conclusions reached at NEC meetings for the greater benefit of the people.

Earlier, Ahmed said her team was at Lagos House as part of the flag-off of the Implementation Monitoring Visit in line with NEC resolution and the retreat which the Vice President had with Governors in 2016.

She recalled that at the retreat, participants agreed to address 71 key items, noting that Lagos State, out of others, had already presented a good plan to the Committee.

The Minister also commended the partnership between Lagos and Kebbi States, especially the new Rice Milling Plant being developed, saying that the partnership was a sterling example of cooperation to expand growth.