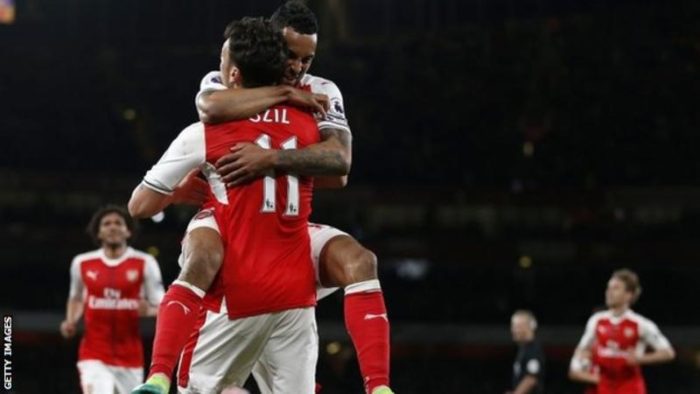 Arsenal boosted their Champions League hopes with a deserved victory over West Ham, who remain in relegation trouble after a fifth consecutive Premier League defeat.

After a quiet first half, Mesut Ozil, on his 150th appearance for the Gunners, fired home from the edge of the box after being gifted possession by Jose Fonte.

And the German, after playing a one-two with Alexis Sanchez, crossed for Theo Walcott – captain for the day in the absence of the injured Laurent Koscielny – to turn home from eight yards out.

Olivier Giroud curled in a fantastic third after being picked out by fellow substitute Alex Oxlade-Chamberlain.

The Gunners are now up to fifth in the table, only four points behind fourth-placed Manchester City, with a game in hand on Pep Guardiola’s side.

West Ham are five points above the bottom three, although it could have been a lot worse had Swansea not collapsed late on to lose 3-1 to Tottenham, BBC reports.