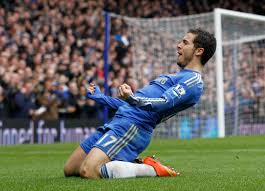 Hazard celebrates one of his goals

Chelsea maintained a seven-point advantage over Tottenham at the top of the Premier League with a hard-fought victory over Manchester City.

Pep Guardiola suffered league defeats home and away to the same opponents in a single league season for the first time in his managerial career as City are left to fight for a top-four place.

Eden Hazard gave Chelsea a 10th-minute lead when his shot deflected off returning City captain Vincent Kompany past keeper Willy Caballero, who should have done better.

Chelsea keeper Thibaut Courtois was also badly at fault when his poor clearance to David Silva set up Sergio Aguero’s equaliser after 26 minutes – but Chelsea were back in front before half-time.

They were awarded a penalty after Fernandinho tripped Pedro and even though Cabellero saved Hazard’s spot-kick, the rebound fell kindly for the Belgian to score.

City, who stay in fourth, had the better chances in a tense second period, with Kompany’s header bouncing back off the bar and John Stones shooting over from six yards in injury time. Chelsea, however, held on for a win that was even more vital given Tottenham’s dramatic late comeback at Swansea City.