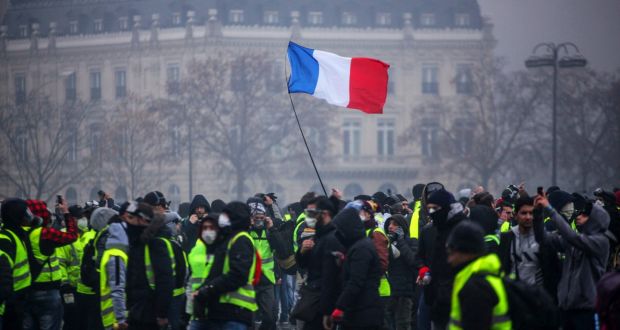 FILE PHOTO: Demonstrators near the Arc de Triomphe during a protest of “yellow vests” against fuel tax increases.

The French government is preparing to suspend fuel tax increases, a government source said on Tuesday, following violent protests against the measures.

“Prime Minister Edouard Philippe was due to announce the suspension later,” the source added, in what would mark President Emmanuel Macron’s first significant U-turn on a major policy since taking power in 2017.

The so-called “yellow vests” protests, which started on Nov. 17, were focused on denouncing a squeeze on household spending brought about by Macron’s taxes on diesel.

According to the media report, the president says taxes on diesel are necessary to combat climate change and protect the environment.

However, they have since evolved into a bigger, general anti-Macron uprising, with many criticising the president for pursuing policies they claim favour the richest members of French society.

Protests in Paris on Saturday turned particularly violent, with the Arc de Triomphe defaced and avenues off the capital’s Champs Elysees suffering damage.

The demonstrations have been given the “yellow vest” tag due to the fluorescent jackets kept in all vehicles in France, and the protests are estimated to have cost millions to the economy.