We are using 19th NSF to harness talents for teakwondo- Chukwumerije 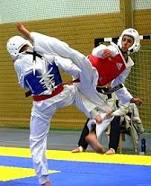 Chukwumerije told the News Agency of Nigeria (NAN) on the sideline of the ongoing NSF in Abuja, that young athletes  were being discovered at the festival.
He said lots of young athletes defeated national athletes and described the development as very promising.
”With the calibre of young athletes being discovered, Nigeria will be one of the countries to look for in continental and international competitions.
”Their performance also shows that our ranking is good and that we are not doing badly in training,” he said.
NAN reports that Rivers,  Kano and Lagos states topped the taekwondo medal table with seven medals each while Kebbi has three on Tuesday.
Delta, Akwa Ibom, FCT have two medals each while Plateau, Nassarawa and Taraba have a medal each.
In the cycling 3-km team female pursuit event,  River dazed other states to win gold while Delta and Oyo won silver and bronze.
In the male 4-km team pursuit category,  Rivers also won gold while Lagos and Ogun won silver and bronze.
Tags:   Chukwumerije   Teakwondo