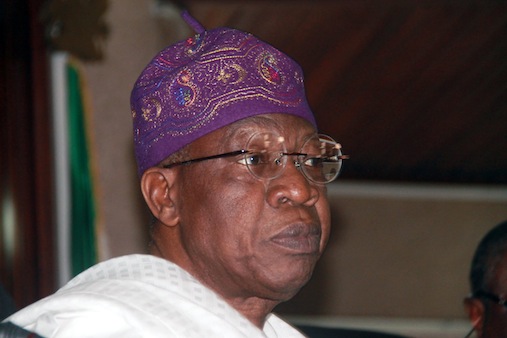 The Federal Government has enjoined the Nigeria Labour Congress (NLC) to discard the Dec. 31 ultimatum issued over lingering disagreement between organised labour and state governments on the proposed N30,000 national minimum wage.

The Minister of Information and Culture, Alhaji Lai Mohammed, made the appeal after a closed door meeting with President Muhammadu Buhari at the Presidential Villa, Abuja.

The organised labour on Thursday gave the ultimatum following Buhari’s statement that a “high powered technical committee” would be set up to device ways to ensure that implementation of the new minimum wage would not lead to an increase in the level of borrowing.

The president stated this on Wednesday when he presented the 2019 Appropriation Bill of N8.83 trillion at the joint session of the National Assembly.

However, the President of the NLC, Mr Ayuba Wabba, who addressed newsmen on Thursday, expressed organized labour’s reservation over Buhari’s position, saying that setting up a technical committee could not be a condition for passing the minimum wage report to the National Assembly.

“We reject in its entirety the plan to set up another `high powered technical committee’ on the minimum wage. It is diversionary and a delay tactics.”

But, Lai, who described the NLC as “a very patriotic union’’, said he was confident the organized labour would not do anything to embarrass the government or Nigerians.

He said: “The Nigeria Labour Congress is a very patriotic union and I am very confident that they will not do anything that will embarrass the government or do anything that is going to worsen the situation.

“Continuous engagement, I think, is the key. We will continue to engage them and I think they do also fully understand what the challenges are, and both parties are determined to ensure that a common ground is arrived at which will be comfortable for all.’’

The minister, who briefed Buhari on the activities of his ministry, said he made a portrait of the President in five major Nigerian attires, “one is in Yoruba, Hausa, Igbo, Efik and one in suit.

“It is reminiscent of the portrait we use during this campaign.’’

On Senate President Bukola Saraki’s comment on 2019 budget proposal, the minister said it was not the practice of the executive to exchange words with other arms of government.

“It is not the practice of the executive to be exchanging words with the legislative arm of government. They are independent, we are independent. To the best of our knowledge, we presented a budget given the circumstances of our resources this year.

“We feel that is the best we can. It is left for the National Assembly to consider it,’’ he said.

Saraki had on Thursday asked Nigerians not to expect much from the 2019 Appropriation Bill, describing the budget proposal as “hopeless”.

The minister also noted that the Buhari administration had delivered on its promises to Nigerians.

“We are happy that we have been able to meet all our promises, all our obligations to Nigerians.

“And as the year rolls out, we are more determined to deliver more to Nigerians.