Buhari congratulates Anyaoku as he clocks 86 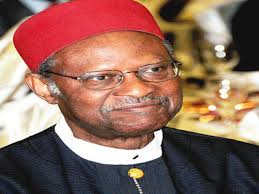 The president’s congratulatory message was contained in a statement by his Special Adviser on Media and Publicity, Mr Femi Adesina, in Abuja on Thursday.

The message read, “Buhari joins family, friends and professional colleagues of the career diplomat in celebrating the many years of lofty achievements and contributions to the development of Nigeria, Africa and Commonwealth of nations.”

The president particularly lauded Anyaoku’s personal interventions in promoting good governance, democracy and peace in many nations of the world.

He also saluted the historical role Anyaoku played in the fight for the emancipation of South Africa from apartheid regime.

Buhari further cited Anyaoku’s exemplary role in the “political, diplomatic and developmental issues that had shaped the Africa continent,” including the establishment of the Organisation of African Unity, now called the African Union.

He described Anyaoku as a visionary elder statesman and applauded “his uncompromising position on the unity of Nigeria, which he has relentlessly pursued, without compromise’’.

The president prayed that God should grant the octogenarian longer life, good health and more strength to continue to render selfless service to his fatherland.