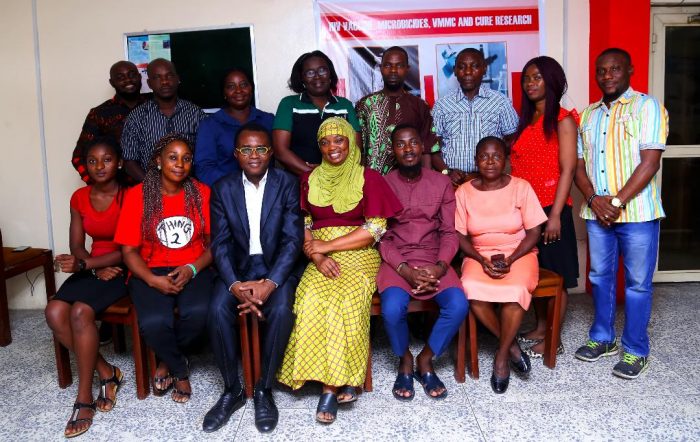 Mr. William Rashidi (seated second from right) and other participants at the seminar.

The imperative of continuous medical research and efforts, accompanied by comprehensive enlightenment and educational programmes, toward curtailing the intractable HIV/AIDS pandemic in the world cannot be over emphasised.

This is the reason organisations around the world such as the WHO, AVAC, USAID, PEPFAR, CRH and so on devote much energy and resources to fights against the scourge.

Latest effort towards this is the invention of a pre-exposure prophylaxis (PrEP) for prevention. PrEP is the use of antiretroviral medications (ARVs) to reduce the risk of infection in people who are HIV- negative so as to stay uninfected irrespective of their sexual behaviours.

The World Health Organisation (WHO)’s guidelines recommend immediate initiation of ART for people living with HIV and PrEP for those at substantial risk.

Research reports of AVAC, a United States based international non-governmental organisation committed to advocacy and global collaborations to accelerate global delivery of new HIV prevention options, revealed that “national regulatory agencies in many countries have approved the daily use of TDF/FTC (a combination ARV marketed as Truvada) by populations at high risk of HIV”.

The highly exposed, otherwise called sexually active persons, are said to include young men and women, adolescent girls, sex workers, discordant couples and so on who find other methods of prevention such as condom and abstinence inconvenient.

The study further stated that the aforementioned categories of people are the most carriers of HIV. It was discovered that, though, the national rate of HIV infection among general population is about 3.4%, demographic study of different populations in the nation indicated that HIV rate among the adolescent and sex workers hovers between 19% and 23%.

Therefore, to achieve an HIV-free society, access to PrEP and other prevention options by these highly exposed persons should be guaranteed.

AVAC factsheets released to the press inform that “taking it as a daily oral pill is one way of using PrEP. Other strategies for using ARVs to help HIV-negative people stay negative are being developed and tested.

“These include a vaginal ring that releases dapivirine slowly over a month of wear, long-acting injectables, quick-dissolving vaginal films and more”.

How safe is PrEP?

The factsheets reveal that clinical research trials have confirmed that “daily oral PrEP is safe. No significant side effects have been observed in PrEP trials to date”.

But for PrEP to give the desired result, adherence is said to be essential. People with high rates of HIV risk behaviours must be highly adherent to consistent use of PrEP.

These were the important messages that were effectively brought home to journalists in a 2-day media training seminar organised between 24th and 25th of January 2019 in Ogba, Lagos, Nigeria by the Centre for the Right to Health (CRH) in collaboration with the 2018 AVAC fellow, Mr. William Rashidi as part of his fellowship programmes.

CRH, a non-governmental organisation that is committed to research, training and advocacy on right to health of all, especially, the vulnerable group in Nigeria, is the host organisation to Mr. Rashidi’s AVAC advocacy project which aims at making PrEP option available to all Nigerians.

The Civic Leadership Institute of University of California trained AVAC fellow said his organisation is determined to see that PrEP became part and parcel of HIV prevention options available to people, and that it becomes accessible to all categories of people in Nigeria.

Therefore, he told the participants at the event to help the society by amplifying advocates’ voices on the need for government and other stakeholders to ensure availability and accessibility of options, including PrEP, for people to effectively protect themselves against the HIV scourge for the collective good of society.

Rashidi stressed further, “my expectation from the press is to ensure that the public becomes more aware what PrEP, as a new method of HIV prevention, is and the benefit it offers in controlling HIV infection in Nigeria.

“The press should become a platform for education for Nigerians, especially those who are at substantial risk of contracting HIV.

“Secondly, the press should help to put pressure on the government, through the National Agency for Control of AIDS, to set and accomplish road map for ensuring PrEP is accessible and available to people who need it for their survival”, he concluded.

The program Director of CRH, Mr. Bede Ezeifule said the centre organised the training because “PrEP has been proven to be efficient for discordant couples and other sexually active persons.

“Taking PrEP consistently has proven up to 92% deceleration in contraction of HIV. So, therefore, we want the press to help to amplify the message by writing about it; preaching it and mobilising, as agenda setter, towards a roll out for PrEP in Nigeria”, he appealed.

His advice to Nigerians?
“Know your status and then enroll for treatment if you are found positive. Those who are HIV-negative should do everything humanly possible to remain uninfected and if they are sexually active, PrEP is an alternative”.