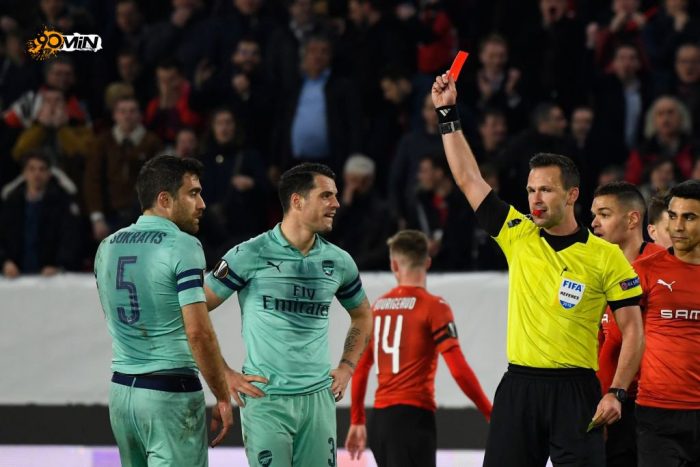 Ten-man Arsenal suffered their first away defeat by a French club in European competition in the first leg of their Europa League last-16 tie at Rennes.

The Gunners appeared to be cruising when Alex Iwobi’s early cross from the left drifted past home goalkeeper Tomas Koubek, into the right corner.

But Benjamin Bourigeaud’s stunning strike, which flew into the top right corner, levelled matters immediately after Sokratis Papastathopoulos’ dismissal for a second booking.

Unai Emery’s side fell behind when Nacho Monreal deflected Mehdi Zeffane’s cross from the right past his own goalkeeper Petr Cech.

And Ismaila Sarr’s diving header in the closing stages compounded a miserable evening for Arsenal.

However, it was no more than the hosts deserved as they capitalised on their man advantage to bombard the visiting goal after the break.

Arsenal will now hope to repeat their heroics from the last-32 stage, where they overturned a 1-0 first-leg deficit against Belarus side Bate Borisov to progress with a 3-0 home victory.

According to BBC, Arsenal arrived at Roazhon Park having never lost an away game against French opposition.

For large parts of the first half, that record looked like remaining intact as they gathered an early lead courtesy of Iwobi and controlled possession.

But instead of extending their advantage, with Lucas Torreira seeing a shot superbly saved by Koubek, and Pierre-Emerick Aubameyang also testing the Czech goalkeeper, they proved architects of their own downfall in an 86-second spell.

Having already been booked for a foul on Hatem Ben Arfa, Greece defender Papastathopoulos foolishly tugged at Sarr’s shirt to earn his second yellow card of the evening.

From the resulting free-kick, Bourigeaud’s equaliser shifted the momentum of the game in the hosts’ favour.

Cech, who replaced Bernd Leno in goal for Emery’s side, produced a string of superb saves, denying Adrien Hunou, Sarr and Ben Arfa twice with the score at 1-1.

But he was helpless to prevent Rennes’ second of the night with the Arsenal defence clocking off to allow Zeffane to reach the ball before it flicked off Monreal into the top corner.

And as Arsenal attempted to see out the game with only a one-goal deficit, they carelessly lost possession to inflict further damage on themselves.

James Lea Siliki escaped on the left and delivered the perfect ball for an unmarked Sarr to head past Cech at the back post, BBC reports.