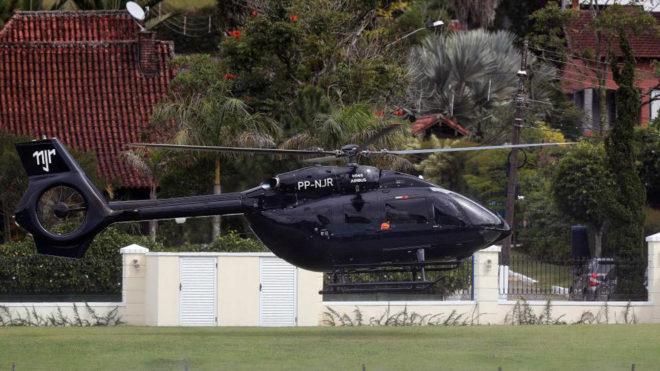 Neymar da Silva Santos Júnior, the most expensive footballer in the world can’t help flaunting his wealth, even at Brazilian teammates.

The Paris Saint Germain striker who was removed as captain as the Brazilian national team goes for training in Teresopolis, Rio de Janeiro in an Airbus H-145 helicopter.

The aircraft which is 13.64 metres long and 3.95 metres high is the product of Mercedes Benz and sells for $14.5 million. Neymar has his initials, NJR inscribed on the tail of the plane.

The black helicopter can cruise at 248km per hour.

Neymar now 27 years old, earns €36.8m a year, part of it from endorsements by global brands such as Nike, Panasonic, Volkswagen, Gilette. His total earnings are however a little less than the €40m earned by Lionel Messi at Barcelona.

The talented striker began playing football at an early age and was offered a contract at the age of 11 by Santos FC. At the age of 16, he earned the equivalent of US$ 40.000 per month.

At the age of 19 he signed an 11 years contract with Nike and started earning more than US$ 25 million per year.

He is now sponsored by companies as Nike, Panasonic, Volkswagen, Beats Electronics, Gilette and Santander. In 2017 he earned US$ 37 million, or which more than US$ 20 in sponsor deals.

His net worth is estimated at more than US$ 150 million, according to the website, privatejetfan.com