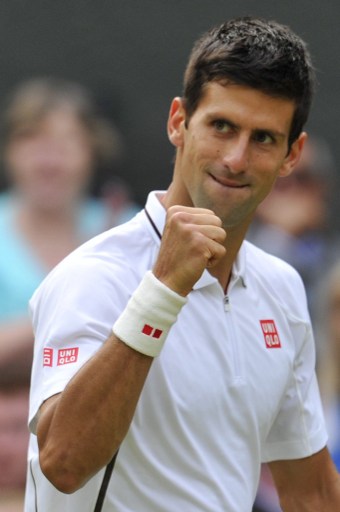 Defending champion Novak Djokovic got his campaign for a fifth Wimbledon title off to a winning start on Monday with newly-hired coaching team recruit, and 2001 winner, Goran Ivanisevic helping steer the ship.

Djokovic, chasing a fifth title at the All England Club, saw off 35-year-old Philipp Kohlschreiber of Germany 6-3, 7-5, 6-3.

But he had to recover from early breaks in both of the first two sets against a player who beat him at Indian Wells this year, as well as a nasty fall on the Centre Court grass.

Djokovic, chasing a 16th career major, will face Denis Kudla of the United States for a place in the last 32.

If his victory was routine, there was nothing predictable about the Serb’s surprise decision to bring Ivanisevic into his inner sanctum over the weekend.

Djokovic said that he and Ivanisevic have been long-time friends.

“I feel as if I contributed to his victory,” he joked.

Fourth seed Kevin Anderson, runner-up to Djokovic in 2018, eased into the second round beating Pierre-Hugues Herbert of France 6-3, 6-4, 6-2.

Czech former world number one Pliskova, fresh from winning the Eastbourne title, has never got past the fourth round at Wimbledon.

She will next face Olympic champion Monica Puig.

Slovakia’s Magdalena Rybarikova, a semi-finalist in 2017, caused the first big upset of the tournament when she put out 10th seeded Aryna Sabalenka of Belarus 6-2, 6-4 in just 70 minutes.

It was Sabalenka’s second successive loss in the first round

Former French Open champion Simona Halep overcame an injury scare to make the second round with a 6-4, 7-5 win over Aliaksandra Sasnovich.

Halep, seeded seven and a semi-finalist in 2014, needed to have her left ankle strapped after a worrying fall on Court One.

She then slipped at 2-5 down in the second set before recovering to beat her Belarus opponent who knocked out two-time Wimbledon champion Petra Kvitova at the same stage in 2018.