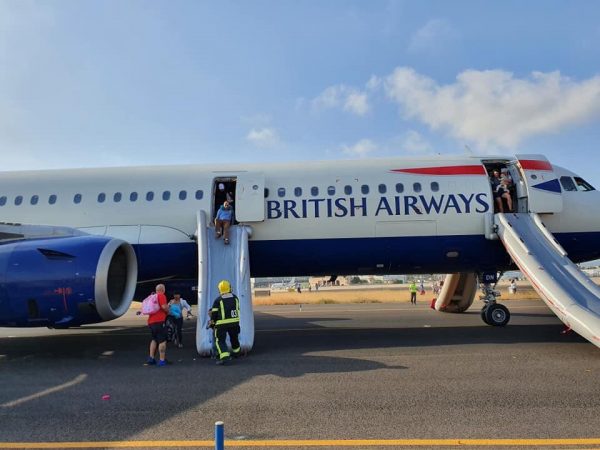 A British Airways flight to Spain has made an emergency landing in Valencia, Spain after ‘smoke engulfed the cabin.’

Footage posted online shows passengers using the evacuation slide on the runway in Valencia, and a clip from the cabin shows the air thick with smoke.

One of the passengers, Lucy Brown posted pictures of the smoking cabin on Twitter and said the journey ‘felt like a horror film.’

She said: @British_Airways terrifying experience on flight to Valencia. Felt like horror film. Thankfully everyone safe. Flight filled with smoke and had to be emergency evacuated. #britishairways.

According to Mail Online, three persons were taken to hospital for checks, and a further 10 people are understood to have suffered minor friction burns after jumping down the emergency chutes during the scare.

Irate travellers have also lambasted the airline on social media after the evacuation, saying there was no first aid or water provided.

People were crying at the terminal, and there has been a lack of information from the airline about the incident.

Miguel J Galindo, posted footage of the passengers being evacuated from the plane and the smoke filled cabin they were forced to deal with prior to landing.

On Twitter, he said: ‘BA422 landed in VLC with smoke on the cabin and passengers leaving through evacuation ramp. what is happenning? No info to passengers.’