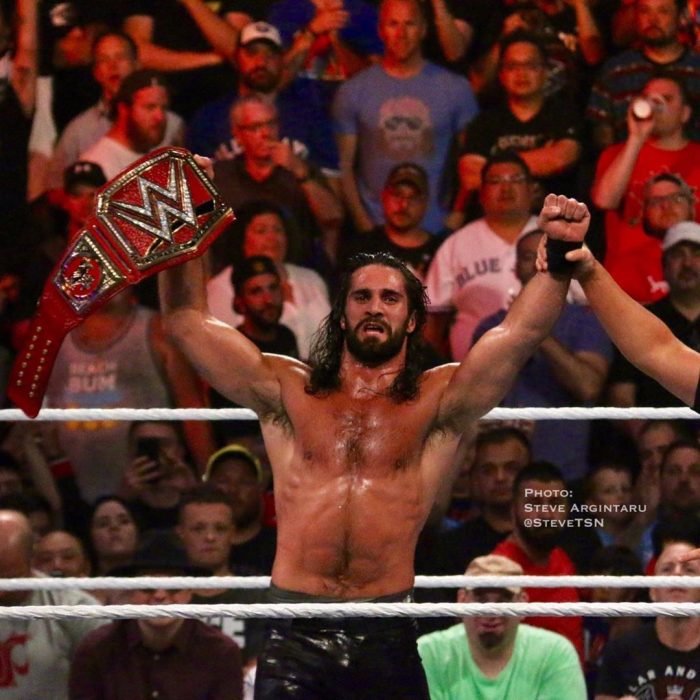 Seth Rollins defeated Brock Lesnar at SummerSlam on Sunday night to win the Universal Championship for the second time.

The Architect built the perfect strategy to dethrone the champion. He used his speed advantage to relentlessly attack Lesnar and countered out of numerous German suplex attempts.

The Beast Incarnate nearly picked up the win, though. He had Rollins in position for the F-5, only for him to wriggle free and hit a super-kick. Sensing his opportunity, the challenger lined up and delivered the Stomp for the victory.

In addition to being a WrestleMania 35 rematch, Sunday’s bout was also a repeat from Extreme Rules when Lesnar successfully cashed in the Money in the Bank contract on Rollins to become a three-time universal champion.

At The Show of Shows in April, Lesnar beat down his rival before the bell and seemed destined to retain the title, but The Architect hit The Beast with a low blow to start his comeback and laid him out with multiple Stomps to win the Universal Championship.

Once Lesnar won the Money in the Bank ladder match the following month, he teased cashing in on The Beast Slayer on multiple occasions. At the same time, Rollins was embroiled in a bitter feud with Baron Corbin.

According to bleacherreport.com, after Rollins and Becky Lynch beat The Lone Wolf and Lacey Evans in a winners-take-all tag team match for the Universal and Raw Women’s Championships, The Beast made his move and stormed to the ring in order to cash in.

Rollins was exhausted from the hard-fought victory and was unable to overcome a fresh Lesnar, which resulted in a title change.

Since automatic rematches no longer exist in WWE, Rollins was not guaranteed one. Instead, he was given an opportunity by being placed in a 10-man interbrand All-Star Battle Royal on the July 15 edition of Raw, with the winner going on to face Lesnar at SummerSlam.

Rollins won that by last eliminating Randy Orton, which set the stage for a highly anticipated rematch with The Beast.

In the weeks leading up to SummerSlam, Lesnar established his dominance by attacking Rollins on multiple occasions. That included hitting him with multiple F5s onto steel chairs and having him sent off in an ambulance.

Lesnar and Rollins are in the middle of a long-running feud that far predates their match at WrestleMania 35. Back at WrestleMania 31, The Architect interrupted the main event between The Beast and Roman Reigns and cashed in his Money in the Bank contract to win the WWE Championship.

More than four years later, Lesnar did the same thing to his rival, who was out for revenge at SummerSlam.

Rollins’ victory could lead to a continuation of his feud with Lesnar, although that may depend primarily on what his schedule looks like moving forward.