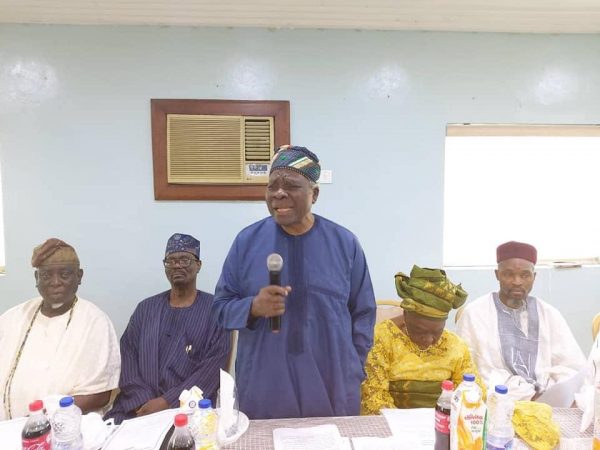 The maiden meeting of Yoruba World Congress, YOWCO, an umbrella of all Yoruba Socio-cultural, self-determination and advocacy groups worldwide has held in Ibadan, with a call to President Muhammadu Buhari to either restructure the country or dissolve it.

Professor Banji Akintoye, a second republic senator, said to have been elected “New Yoruba Leader” declared, amidst applause from the gathering at Jogor Event Centre, that “Nigerian Government should either embrace restructuring or dissolve the country”.

The meeting had in attendance 80 Yoruba groups, espousing self-determination of the ethnic group. And they came apart from South West, from Edo, Kogi, Kwara and Delta States, where there are also conclaves of Yoruba ethnic stock or descendants.

Central to the congress, were issues of security, economic challenges, food security, infrastructure decadence, youth unemployment, social exploitation; and how to move the region forward.

Akintoye, in his welcome address, pointed out the importance of defending and promoting the interest of the Yoruba nation in Nigeria, lamenting the decline of the influence of the Yoruba and the various efforts by different groups to salvage the situation.

Akintoye stated that “In today’s conference, we the founders and members of the Yoruba World Congress have assembled first to introduce and to highlight our objectives. We are gathered to send a clear message to the Yoruba people and to the other peoples of Nigeria that we are a great ancient civilization, the most educated people in Africa, and a people with widespread and enormous influence in the world.”

“We are sending notice to those who harbour dangerous and destructive ideas of conquering and subduing other peoples of Nigeria that our Yoruba nation is far beyond their capabilities to subdue.

“While we will continue to honour our tradition of hospitality to foreigners in our land, we will not hold back any effort to force out from our land any foreigners who come with the intent to hurt, to kill, to maim and to destroy.

“We do not harbour any ambition to subdue any people or to seize any part of their land, and we will make it absolutely clear to the world that nobody can seize any inch of our land. We also serve notice that we will resist and reverse the trend toward retrogression in the life of our nation in Nigeria.

“We will mount a multifaceted operation to stop our language from decline. We will mount powerful operations and campaigns to revive our agriculture, and to revive our industrial development that has been deliberately stopped in Nigeria. It is either they restructure Nigeria or dissolve the country peacefully”.