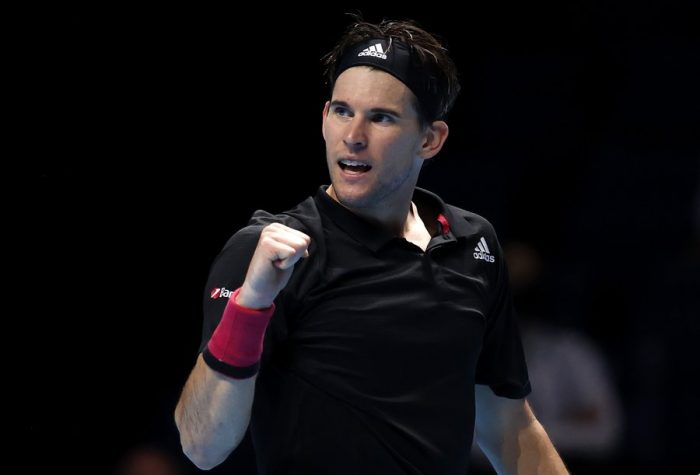 Dominic Thiem came back from 0-4 decisive set tie breaker on Saturday to defeat World No. 1 Novak Djokovic in a nail-biting semi-final clash at the ATP Finals in London on Saturday.

The victory marked the second successive year that the Austrian World No. 3 will make the final of the season-ending tournament.

The 27-year-old appeared to be sliding to defeat when he trailed Djokovic in the set tie-breaker, but stormed back to claim a 7-5 6-7(10) 7-6(5) victory in just under three hours.

Thiem was the better player in the first set, sealing it with an ace after breaking serve at 5-5.

An absorbing second-set tiebreak saw Thiem get four chances to seal victory but he double-faulted on one match point and Djokovic showed true grit to snatch the set.

Serves dominated in the decider and when Thiem started the day’s second tiebreaker and then lost the next three points it seemed as though the end was nigh.

Instead the world number three roared back, winning the next six points and setting up two more match points with a scorching crosscourt backhand, one of many he unleashed during the duel.

Djokovic saved a fifth match point but Thiem finally got the job done when he forced his opponent to float a defensive forehand over the baseline.

Thiem will try to complete a breakthrough year, in which he claimed his first Grand Slam title by winning the U.S. Open, against either Rafa Nadal or Daniil Medvedev in Sunday’s climax, guaranteeing a first-time champion for the fifth year in a row.

“It was a mental battle, I got so tight in the second-set tiebreak,” Thiem, who avenged his defeat by Djokovic in this year’s Australian Open final, said on court.

“To play these legends is always special and to play here is also something special. I thought after winning the title in New York I would be more calm, but that was a mistake I guess.”

Djokovic appeared a little flat at times, especially on his trademark returns, but looked as if he had pulled an unlikely victory out of the fire, only to suffer an ambush.

“I don’t think I played bad, I made all my first serves; he just crashed the ball and everything went in. What can you do?”

Thiem, who racked up his 300th career Tour win, is now established as a major force and will attempt to go one better than last year when he lost to Stefanos Tsitsipas in the final.

Defeat means Djokovic will have to wait until the event moves to Turin next year, after 12 years in London, to try again to equal Roger Federer’s six titles at the year-ender.