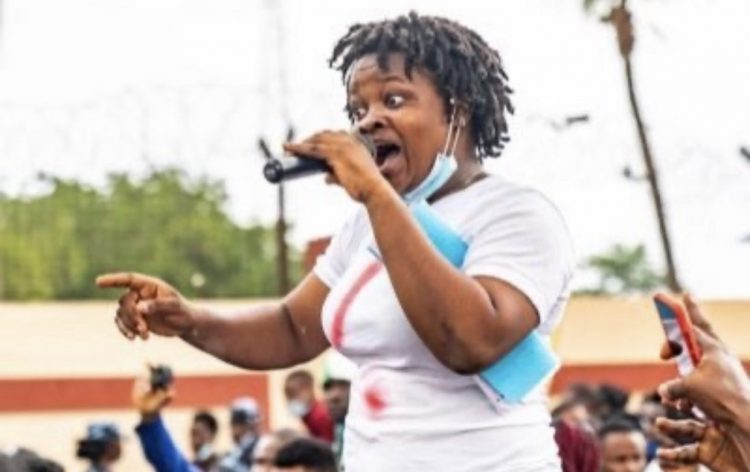 A youth representatives at the Lagos Judicial Panel on SARS brutality, Rinu Oduala, has pulled out of the panel over undue intimidation and re-opening of the Lekki Tollgate.

Oduala announced her pullout of the panel in series of tweets on Friday.

She said after going silent for a month, troll accounts dedicated to belittle her work and sowing doubt about her age and right to express herself as a citizen of Nigeria were reactivated, her stand on the reopening of the tollgate was clear.

“They targeted me by releasing fake tweets & turn the public against me. My stand on the reopening on the toll gate is clear; the state govt & the private organisation operating the toll have not been cleared of collusion with elements allegedly deployed by the federal govt to target citizens on home soil during a time of peace, without provocation.

“Justice has not been served, and as a representative of the Nigerian citizenry, my only recourse is to stay the course of justice. Let me be clear: I chose to honour the invitation to represent my peers and to stand as an example that any Nigerian has the right to demand accountability of elected government officials and that our institutions, however flawed, can still deliver justice.

“What I will not do is be part of a cover-up. I am proud that I took the invitation because some of the successes the panel has recorded so far have been incredibly powerful for the people.

“For the first time, SARS victims have had the opportunity to be truly seen and heard by the govt, by the public, and by the system that let them to be victims in the first place. The panel allowed victims of police intimidation and brutality to have their day in the light of justice,” she said.

Oduala added: “they got to expose the violence that was meted out, to experience some catharsis from having the government acknowledge its failures and, in many cases, are going to be receiving some compensation, however inadequate for the disruption to their lives.

“This is further than we have ever come as a nation, and while this same rigour is not being applied to the case of the Lekki Toll shootings, we can at least celebrate the wins that our brothers and sisters can finally claim in their fight for justice, and recognise that our collective will is more powerful than any institution.

“However, partial wins are not enough for me. I decided to join this fight because I wanted the government to recognise its failures and work to overhaul its security institutions. I did not expect piecemeal acknowledgements and efforts to sabotage vital proceedings.”

According to her, “On 6th February 2021, we were ambushed with votes to reopen the toll gates. I participated because I do not believe in silence. It is clear where my loyalties lie.

“But at the end of the day, parties on the panel voted to reopen the toll, citing lost jobs as more important than justice for lost lives through a proceeding that didn’t form a proper quorum without the reps who represent the youth constituency that birthed the idea of the panel,and on whose mandates the panels were set up.

“Coupled with the undue intimidation of peaceful protesters, the cyber attacks accounts loyal to the government, and many more, I will be stepping down from the Lagos Judicial Panel as it is now obvious that the government is only out to use us for performative actions.”

Oduala said Nigerians must not forget the purpose of this panel: to address injustice and create accountability for the SARS brutality and for the heinous events on 20th October 2020.

She stated that when calls for justice were subsumed by commercial concerns and vested interests, it called into question the legitimacy and integrity of the entire affair and the impartiality of the proceedings, adding that without a final panel report or actionable steps, “we are returning to the status quo.”

“I might be one woman, but there is so much I can do, outside of this cycle of hand wringing and lies, and I refuse to be manipulated into gaslighting the people and attaching my name to a rubber stamped and foregone conclusion. I have held the govt accountable even if my life is threatened, and will continue to do so.

“There are trolls at every level that must be countered with facts and victims that are affected by the actions of this govt, even if they don’t have the words to articulate their suffering Some have lost their loved ones, many permanently disabled for life due to torture or bullet effects while others forever scarred from encounters with the Nigerian law enforcement agencies who are supposed to protect us,” she said.

She said she hoped to spend the next few months reconnecting with these people, documenting their stories, and empowering the children and family of the deceased SARS victims who were not alive to fulfill their dreams.

“For anyone tired of hearing me demand better for my country: the only way to convince me to back down is to do your part to make Nigeria work. I will be doing mine, in the communities where it matters, with the tools at my disposal.

“I fear for myself, my family, and my friends; for my future but so did the young people whose blood taints the Lekki Tollgate. It is from them I draw inspiration to continue my fight. May we all see the Nigeria we deserve,” she said.