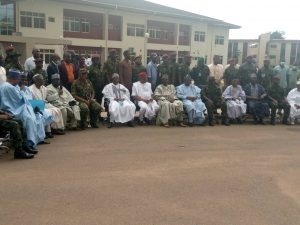 The visit was part of activities marking the second anniversary of the 9th Assembly.

Lawan, who pledged adequate funding for the armed forces, donated N10 million to the wounded soldiers.

He said that the visit was to show compassion and empathy to the affected soldiers wounded in defending the territorial integrity of the country.

The senate president added that the visit was also to assess the needs of the military.

Lawan advocated for more resources to cater to the need of soldiers wounded in action, stressing that any military in the world was a reflection of the nature of investment on it by its country.

He assured that the National Assembly would expeditiously treat the Armed forces supplementary budget as soon as it resumes from the anniversary recess, adding that the 2022 appropriation would provide more resources for the Armed forces.

Lawan commended the Armed forces in its effort at securing the territorial integrity of Nigeria, urging it to sustain the tempo.

In a remark, General Officer Commanding 1 Division, Kaduna, Maj.-Gen. Danjuma Ali-Keffi commended the Senate President for the visit, describing it as symbolic.

The Acting Chief Medica Director of the hospital, Col. Steven Onuchukwu said the visit would serve as a morale booster, especially as the military intensified the fight against insurgency in the country.

The Senate president later took a tour of the hospital.