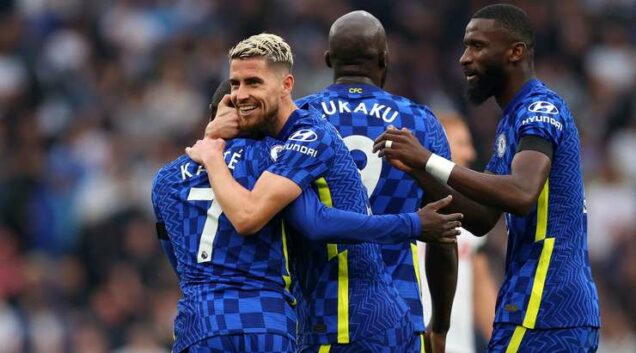 Chelsea have moved joint-top with Liverpool after demolishing Tottenham Hotspur 3-0 away from home on Saturday.

It was a clinical Chelsea team that put Tottenham to the sword with goals from defender Tiago Silva, Ngolo Kante and Antonio Rudiger.

For the first time under Thomas Tuchel, Chelsea failed to register a single shot on target during the first 45 minutes.

Less than 360 seconds after the interval, however, they had managed two, with the sublime Thiago Silva heading home Marcos Alonso’s corner after Hugo Lloris had parried an awkward volley from the Spaniard.

Despite showing plenty of intensity in the first half, Tottenham were now being blown away by their opponents, and it wasn’t long before the visitors scored the second goal.

Substitute N’Golo Kanté’s drive took a wicked deflection off Eric Dier on its way past Lloris via the post, but Tuchel’s men deserved nothing less given their stunning improvement.

Other than a Harry Kane effort that Arrizabalaga easily held, Chelsea saw the game out with ease, and added a third in stoppage time, when Timo Werner’s low cross was driven in by fellow countryman Antonio Rüdiger.