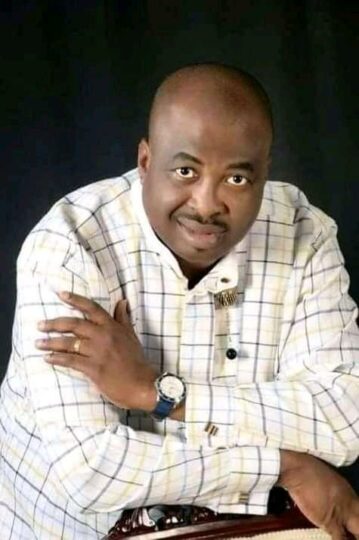 Hon. Golden Chioma, a former leader of the Rivers House of Assembly and APC Chairmanship candidate loyal to Senator Magnus Abe: Kicks against decision to go ahead with Rivers APC State Congress

A former leader of the Rivers House of Assembly Golden Chioma and a member of Magnus Abe faction of All Progressives Congress, APC has petitioned the national Secretariat of the party over the decision to go ahead with the Saturday state congress of the party.

Chioma who has also indicated interest to contest for the position of state chairman of the Rivers APC.

But he disclosed on Friday that it would be unfair to participate in the congress when he does not know the identity of the delegates who will vote in the exercise.

He added that the legitimacy of the ward and LGA congresses which produced those who will vote as delegates in the congress is still an issue yet resolved by the national leadership of the party.

Chioma added that although he is still interested in the position of Chairman of the APC in Rivers State, he doubted if he would participate in Saturday’s state congress which is expected to produce a substantive Chairman and other Executives of the party.

He said the national leadership of the party had promised his faction that their concerns and petition against the conduct of the ward and LGA congresses would be addressed—before a state congress will be conducted in the state.

“The party leadership said we should wait, so we are waiting. And when the party moved the state congress from September to tomorrow, it was all in furtherance to resolve the disputes emanating from the ward and local government congresses.

“I am not withdrawing. The race is still on, but may not hold tomorrow because we have already notified the national leadership that the congress that was held at the ward level were not valid. I am waiting for a reply to my petition from the national secretariat which I sent since.”

Chioma called on members of the APC in the state to continue to be resolute and insist that the right thing is done.

Golden Chioma warned that he will not hesitate to challenge the outcome of the congress in court if the process is flawed.

“I am contesting to create a united front for the party, to rejuvenate it, and to make the party win election in the forthcoming election, where all members of the party will feel loved and wanted. No party member will be discriminated against for supporting anybody whatsoever. Once you are a member of the APC, you will feel entitled to participate in all activities devoid of discrimination,” he said.

The former lawmaker and strong ally of Senator Magnus Abe dismissed insinuations that he is ineligible to contest as he did not participate in the recent revalidation exercise conducted by the party in the state.

“It is only the national leadership that can point to those who have been validated and those who have not. It does not lie within the purview of those who feel that they will continue to spearhead the spoiling of the party by segregating who has registered and who has not registered. The party is for all of us.”

But Chief Emeka Beke, a chairmanship candidate of the faction of Rivers APC the loyal to Chibuike Rotimi Amaechi Minister of Transportation said he is prepared for Saturday’s congress.

He also expressed confidence that the party will win the 2023 gubernatorial election in the state.

Beke also dismissed reports that he has been endorsed by the leader of the party in the state, and by Amaechi to emerge as Chairman.

The APC chairmanship hopeful said he is rather counting on the goodwill and support he enjoys from political associates due to his dedication and sacrifices made as a foundation member and two term secretary of the party in the state.

Beke who has been on campaign and consultations to stakeholders in Rivers APC pointed out that he would not have bothered himself going from one place to another, consulting and appealing to delegates to vote for him on Saturday if he had been endorsed by the leader of the party as speculated.

Beke also said that he would ensure he reconciles every aggrieved member of the party, and bring them together to forge a common front with the aim of winning the 2023 general election in Rivers State.

He promised to work with every genuine member of  Rivers APC if he emerges victorious at the congress this weekend.

“I want to work with every member of APC in Rivers State—genuine members, not those who are not genuine members of the party, not those that are in APC in the morning; in the night they are in PDP. What the heck are we talking about? People should have integrity.”

“The interest is for us to put the party together and win the 2023 general elections; I can assure that APC will win 2023 election in Rivers State.”