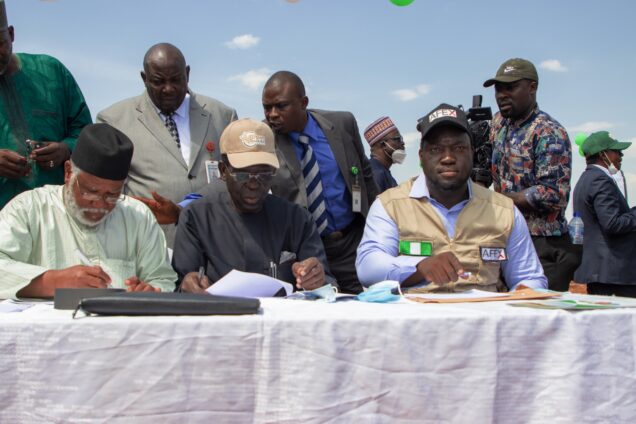 The partnership was announced at an MoU signing ceremony at the launch of the Brown Revolution Initiative by the Federal Government on Tuesday.

The partnership is targeted at achieving the objective of the Federal Government’s Anchor Borrower Program on wheat production in Nigeria.

The Federal Government is expending significant effort to increase wheat production in the country, which led to the unveiling of a new programme to enable Nigerian farmers to plant wheat during the dry season by utilizing irrigation.

Alongside the Central Bank of Nigeria, President Muhammadu Buhari launched the Brown Revolution Initiative to address challenges in the wheat value chain of the country.

President Muhammadu Buhari reiterated the Federal Government’s commitment to food security and price stability and noted that wheat was a priority due to its critical role as a key ingredient of many primary staple foods.

“One of the legacies this administration desires to achieve before leaving office is zero importation of wheat,” the president, represented by Plateau State Governor Simon Lalong, said.

“To this effect, we will work with all stakeholders to ensure this objective is achieved in more impactful ways for the Nigerian economy,” he added.

Under the partnership, AFEX Suppliers would be responsible for the proper cleaning and grading of the commodity, while it will be aggregated and collected at designated collecting locations for FMAN members to off-take.

“Our partnership with FMAN is to provide assurance to wheat farmers about the marketability of their products and help in the implementation of Government policy regarding import substitution, job creation and economic empowerment of wheat farmers,” said Ayodeji Balogun, CEO, AFEX, while signing the MoU.

“As a commodities exchange and capital market player, we are able to deploy a top notch services for the proper cleaning and grading of the commodity that will drive production and reduce the country’s wheat imports drastically,” he said.
Balogun added that AFEX’s overall aim is to commercially structure the agricultural food system in the country in a way that benefits all value chain players.

The CBN will fund and oversee the Brown Revolution Initiative. Godwin Emefiele, the CBN Governor, represented by the Deputy Governor, Edward Adamu, stated at the event that the programme would be critical in reducing the country’s wheat imports by 60% over the following two years.

According to him, the government would address critical value chain issues by financing massive wheat production in Nigeria and will also ensure the continued availability of high yield seed varieties in the country to increase overall productivity.

The apex bank said it has acquired high yield varieties of wheat seeds from Mexico, indicating that the short-term benefit of the initiative would be the addition of about 2,000 Metric Tonnes (MT) of the high yield seed variety to the national wheat seed stock.

The apex bank added that the effort also has the potential to add about 750,000MT of wheat annually through during the dry season cultivation.