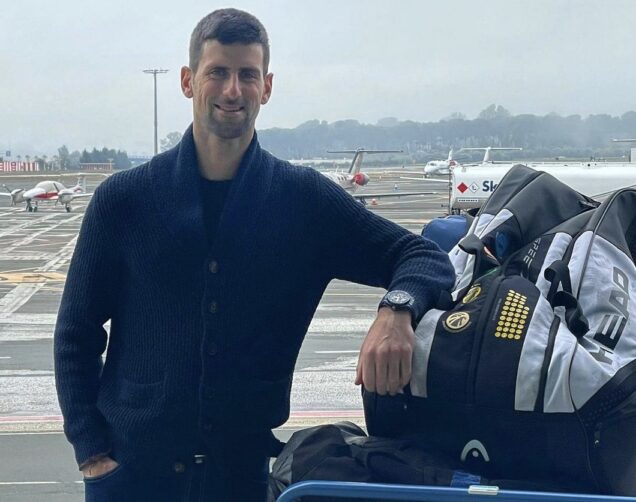 Novak Djokovic has landed in Melbourne Australia but faces being kicked out on the next available plane, as vowed by Prime Minister Scott Morrison.

Djokovic became stranded at the airport after officials discovered the tennis star’s team bungled his visa application to play in the Tennis Open without being vaccinated.

The world No.1 landed at Melbourne on an Emirates flight from Dubai at around 11.15pm.

He landed hours after Prime Minister Scott Morrison threatened to send the Serb back ‘on the next plane home’ if he could not provide evidence for his vaccine exemption.

But Djokovic, 34, is snagged at customs after a member of his team made a critical mistake in requesting a sub-class of visa that does not apply to tennis players, sources told The Sydney Morning Herald.

Border Force contacted the Victoria government earlier on Wednesday after finding that the tennis star’s team had submitted the wrong type of visa, one which does not allow medical exemptions for being unvaccinated.

The border agents asked if Victoria would support the document – but they refused, saying that visa applications were a matter for Morrison’s government.

While Djokovic had been granted a medical exemption from a Covid jab by two independent health panels, approval for the visa is a separate process.

The wrangling at the border remained ongoing as of midnight local time (1pm London).

It is not clear what course of action remains open to the athlete. Other previous visa disputes such as his have seen travellers detained at the airport before being sent on a flight back to their country of origin.

‘The Federal Government has asked if we will support Novak Djokovic’s visa application to enter Australia.

“We will not be providing Novak Djokovic with individual visa application support to participate in the 2022 Australian Open Grand Slam,’ the tweet said.

Australian news channel, news.com.ausaid Border Force officials have the discretion to allow Djokovic into the country in spite of the Victorian government move however is fate is still unclear.

A government source told the Herald Sun “they may have to send him or put him in immigration detention.”

Australia has reacted with disgust to news the nine-time champion at Melbourne Park had been granted a vaccination exemption to play in the tournament starting on January 17.