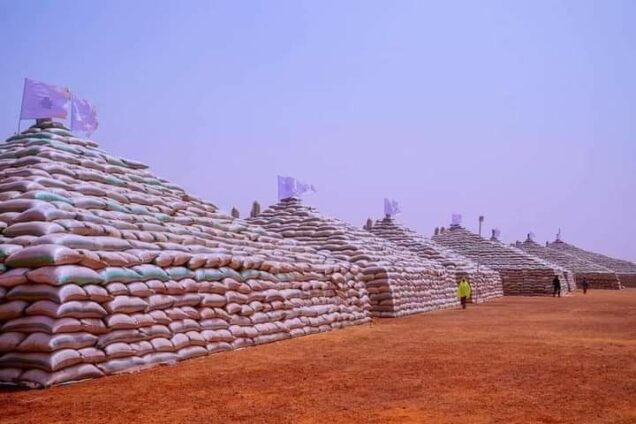 Information obtained from the apex bank’s official website stated that the pyramids, which it described as the largest in the world, were enabled by the CBN’s Anchor Borrowers Programme (ABP).

It stated that the ABP, since its inauguration in November 2015, had increased the average yield of rice per hectare from 1.8 metric tonnes to five metric tonnes, while discouraging importation of the commodity.

“The ABP has enabled 95 per cent reduction of Nigeria’s annual rice import bill from 1.5 billion dollars in 2015 to 18.5 million dollars.

” It has also created 12.8 million direct and indirect jobs across different value chains and food belts of the country, ” it said.

Despite the challenges of flooding during the wet season, the COVID-19 pandemic and lingering insecurity in 2020 and 2021, CBN was still able to work with other stakeholders to inspire farmers to reap bountiful harvests.

It added that similar rice and maize pyramids had been unveiled in states like Kebbi, Niger, Gombe, Ekiti, among others.

Meanwhile, some stakeholders have commended the apex bank for the ABP initiative and support to farmers.

A farmer, Mr Abubakar Alli, said that the idea of the ABP and CBN supporting state governments to boost food production had been encouraging.

” I must commend the CBN for its support through the ABP, toward rice production in Nigeria and supporting different state governments to boost production,” he said.

Also commending the initiative, Chinonso Elendu, urged the authorities to ensure that farmers were safe in their farms.

“This is a very good move, but we need to make sure our farmers are safe and crops should be affordable to everyone,” he said.

According to Hussein Ibrahim, the unveiling of rice pyramids across the country, which indicates improved capacity to cultivate rice, should also make it cheap and affordable to the common man.