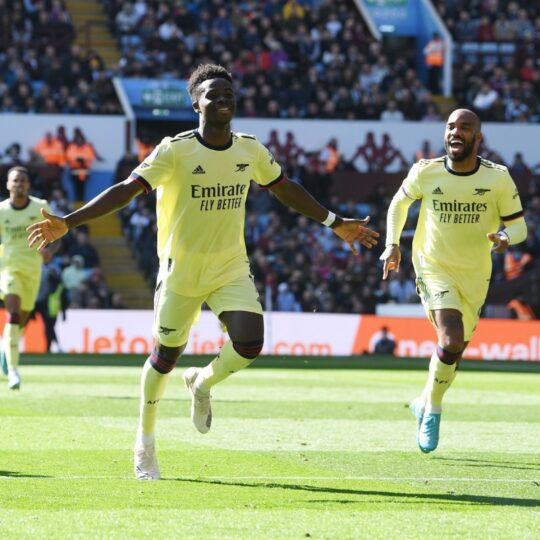 Bukoya Saka after scoring for Arsenal

Arsenal strengthened their hold on the final Champions League spot in the Premier League with a 1-0 win over Aston Villa on Saturday.

The goal was secured by a first-half strike by winger Bukayo Saka as he latched onto a ball that was weakly cleared by the Villa defense.

The England international lashed a low, first-time shot past unsighted goalkeeper Emiliano Martinez from the edge of the area in the 30th minute.

Arsenal — missing first-choice goalkeeper Aaron Ramsdale because of injury and in-form winger Gabriel Martinelli because of illness — was in control for most of the lunchtime game at Villa Park despite the short turnaround from its loss to Liverpool on Wednesday night.

Saka was a constant danger and his well-taken goal took him to nine in the league this season, during which he has established himself as regular on the right wing.

Arsenal moved four points clear of fifth-place Manchester United and within five of third-place Chelsea in its bid to return to the Champions League. This season is the first in a quarter of a century that Arsenal has not been involved in European competition.

Arsenal also has a game in hand over United, which isn’t in action this weekend.

Ninth-place Villa was strangled by Arsenal’s intensity in midfield and had only a few sights on goal, mostly in the second half.

Ollie Watkins struck the base of the post in the 68th minute with what proved to be the hosts’ best chance.