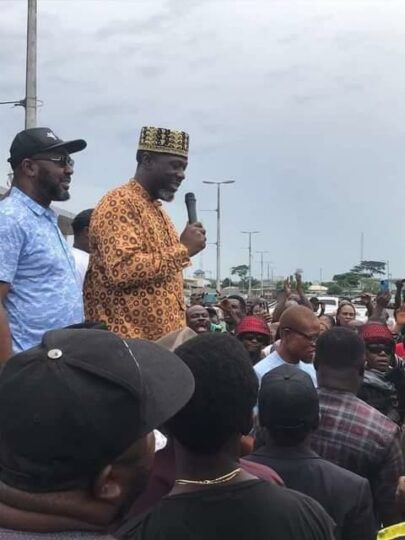 Former Caretaker Committee Chairman of All Progressives Congress, APC in Rivers, Ojukaye Flag Amachree has joined the race to succeed Governor Nyesom Wike with his purchase of expression of interest and nomination forms to contest for the state’s governorship in 2023 election.

Amachree,not only picked his forms and posted the photos news and online,he was also welcomed by supporters who received him at Port Harcourt International Airport today, Sunday.

Giving indication of this in a very brief speech at the Airport, Amachree said, “Rivers people must be allowed Rivers speak. I’ll address you people tomorrow. Go home,be law abiding and peaceful.”

Governorship aspirants on the platform of APC had signed an agreement tacitly agreeing that all of them will support any of them the party picks by Consensus.

Tonye Cole was eventually picked as the Consensus by the Elders of the party in the presence of other aspirants, except Senator Magnus Abe and two others.

However, governorship aspirants like Prince Tonye Princewill and Dr Sokonte Davis openly accepted the decision of the party elders,but some are yet to state their position.

Abe who has been opposed to the Leader of the party in Rivers, Chibuike Rotimi Amaechi who is also the Minister of Transportation said he will not accept any method that does reflect the general will of members of the party and Rivers people.